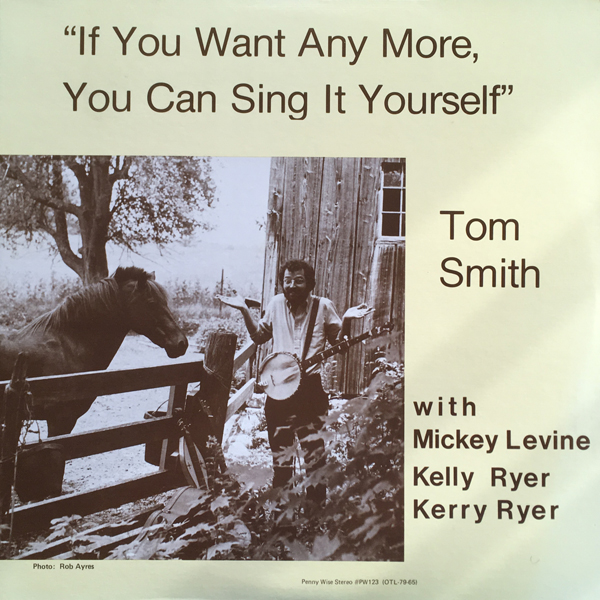 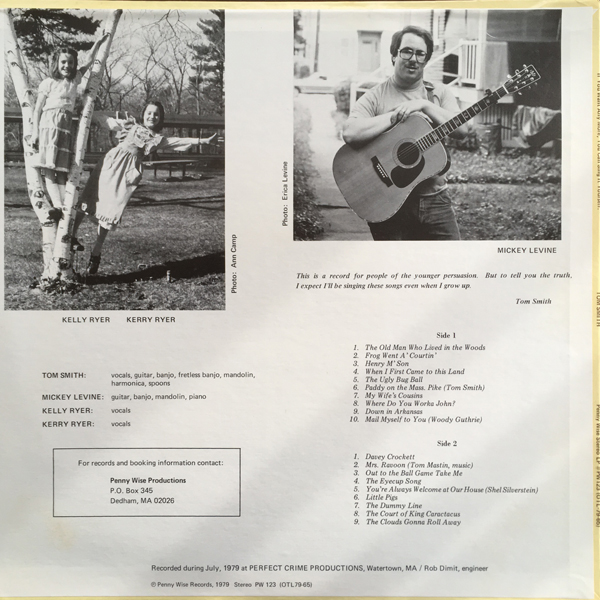 From the rear record cover: “This is a record for people of the younger persuasion. But to tell you the truth, I expect I’ll be singing these songs when I grow up. – Tom Smith”

Using a computer, you can download the album at this link. This downloads a compressed “zip” file, most likely to your “Downloads” folder. Double click on that file to uncompress it to a folder containing mp3 audio files.

If you only want to listen to individual songs, scroll down.

I recorded this album in 1979 when the bulk of my programs were traditional songs, or songs for families. Many of them reflect a time of my life when the world seemed simple, and as I listen now I consider them to be refreshingly innocent. For a couple, I now realize that they may be insensitive or even offensive to some. Lyrics that I viewed as humorous or harmless back then don’t seem that way to me now. (Like the “suicide” verse in “Clouds Gonna Roll Away”, or the violence in the Shell Silverstein song “You’re Always Welcome at My House”.)

These 19 songs were recorded over two weekends in July of 1979, at “Perfect Crime Productions” in Watertown, Massachusetts. Mickey and I did our fourteen songs in the first weekend. Kelly and Kerry recorded five on the following weekend. My wife Margo was pregnant with our first child at the time, and I knew that if I didn’t record immediately it would probably never happen. My goal was to simply document the songs I was singing in my family folk shows, and also to capture my young friends Kelly and Kerry before they grew up. Happily, Kelly and Kerry are thriving adults now who both make music an integral part of their professional and personal lives – although their repertoires have evolved significantly.

As I listen to these recordings now forty years later, many emotions rise to the surface. The first is embarrassment. To my ear, this singer doesn’t sound like me. The high pitched, thin vocals, out-of-tune instruments and amateur performance don’t seem up to the task of a studio recording. I am tempted to hide them. But over the last year or two, I have received several e-mails from people who listened to and loved these songs when they were children. They tell me that they would like to share them with their children, or even their grandchildren! So with a little hesitation, I offer them for you to freely download.

Ultimately, I embrace and acknowledge these songs as a record of an innocent time and place. Some of them are founded in my childhood growing up in Northeastern Pennsylvania – my early roots in the anthracite city of Scranton and my isolated middle childhood in the rural Allegheny Mountains. Others remind me of how they helped me to escape the turmoil of the Viet Nam and Civil Rights era in Cambridge, Massachusetts. They also remind me of a time when my love of working with children blossomed as I started my teaching career and eagerly anticipated the birth of our first child.

I offer these recordings to you with my gratitude for all who have listened to my music over the years, sung with me then and now, and encourage me to grow and evolve in music and life.

Click on the title to hear each song. To download the entire album, see link at top of this page. Scroll down this page for the liner notes about each song.

All songs traditional, except where noted.

ABOUT THE SONGS
Album Liner Notes

1. The Old Man Who Lived in the Woods

Bill Bonyun of Wiscasset, Maine, introduced this song to me. Bill was the musicologist at the Olde Sturbridge Village, and probably knew a thousand songs from memory – some with thirty or more verses. He was a great friend and mentor.

According to Eloise Hubbard Linscott, the oldest version of this story in English dates back to the late 1400’s. I have also been told that this has roots as a Scandinavian folk tale.

There may be more variants of this song than any folk song I know. When Jan Downey sang this version for me, I fell in love with it instantly. My home made fretless banjo was a perfect fit. Jan grew up in Arkansas and learned it there from Almeda Riddle.

Kelly and Kerry learned this song from their contemporaries, Cora and Henry Pierce of New Bedford, MA. It is a parody of “Lord Randall”, an old Child ballad #12.

4. When I First Came to this Land

This song comes from Pennsylvania Dutch country, not far from where I grew up. Originally it was sung in German. I never knew it as a boy, but have made up for lost time by singing it wherever I go.

Armen Varteressian and Dan Lynch taught me this song while we were in college. They did a rather infectious “dance” while singing the chorus. This song was written by the Sherman Brothers (Robert and Richard) and sung by Burl Ives in the 1963 Disney move “Summer Magic”.

During the great Boston blizzard of 1978, we were pretty much trapped in our apartment. I came down with a bad case of “cabin fever”. After the fifth day of looking at the world through frosted glass, my wife Margo suggested I would feel better if I found something to keep me busy. That previous Christmas, my brother Snuffy (that’s right, his name is Snuffy), gave me the Foxfire series of books. In volume 3 there are several designs to make a fretless banjo. The directions called for some interesting materials, not easily found in Belmont, MA. But using a mahogany plank, a #10 bean can that I rescued from the school cafeteria, an old skin banjo head from a throwaway mandolin-banjo, some nylon strings from a guitar I no longer played, Elmer’s glue and nails – along with a few crude tools, I ended up with a banjo that I still treasure and play. I made a measuring error, which resulted in a neck that is a couple inches longer than it should be. The resulting baritone range gives this banjo a very special tone.

The first time I tuned up the banjo, it gave this new tune to me. Mickey Levine gave the name.

I learned this from Ted Schirmer of Lehighten, PA. As a young man, Ted was a mule driver on the old canals down there. He picked up this song from the old timers he worked with.

8. Where Do You Worka John?

My older brother Terry and I used to sing this song when we were kids in Northeastern, PA. I learned the second verse from my folksinging friend, Rob Joel. Now that we have the Internet, song research is a lot easier. Imagine my surprise when I heard it sung in Italian with rather ribald lyrics.

Kelly and Kerry learned this song from the singing of Debbie Saperstone of Cambridge, MA.

10. Mail Myself to You (Woody Guthrie)

The kids of the Folksong Society of Greater Boston taught me this great Woody Guthrie song. It has been a staple of my family shows now for forty years.

In 1978 (circa) I spent my spring break from teaching in the Helen Hartness Flanders ballad collection at Middlebury College in Vermont. It was a great honor to be granted free access to their original old disks of field recordings of New England ballads and folk songs. They were recorded in the 1930’s and 1940’s. “Davey Crockett” appeared in several versions in her collection. The one I sing here is a combination from the versions of Elmer George and Charles Fennimore, both of Vermont. It was very difficult to make out the words of Mr. Fennimore’s version because it sounded like he had no teeth.

Harry Tuft sang this song on his Folk Legacy record album. That is where Kelly and Kerry picked it up. In the liner notes, Harry said that Tom Mastin called it an “old English rhyme” and added the music.

3. Out to the Ball Game Take Me (Jack Norworth and Albert Von Tilzer)

This is a 1908 Tin Pan Alley song by Jack Norworth and Albert Von Tilzer. Many folks consider this to be the anthem of baseball, and fans across the nation sing it with gusto in the middle of the seventh inning. At a living room singing session in the 1970’s, Jan Downey dropped the first two syllables the second time through it. That is how I continue to sing it to this day.

My nephew Adam Noble taught me this song when he was four. He learned it from his father George, who told me that he used to sing it with the Duke’s Men while at Yale. That would be about 1967. I have no idea who wrote it.

This Shell Silverstein song was introduced to Kelly and Kerry by Florence Brunnings of North Weymouth, MA. Florence was well known in the Greater Boston Area as someone who kept detailed notes on folk song sources and recordings. This song of course is not meant to be taken literally.

I learned this from an old Stinson recording by Richard Dyer-Bennett. My studio notes remind me that recording this song was delayed a bit by a bad case of hiccups. My friend and mentor, Bill Bonyun knew Richard Dyer-Bennett personally and said he had a very formal stage presence – always dressed in a tuxedo. It tickles me to imagine this formal man singing this song in his high pitched voice while dressed in black tie formal wear.

In the 1970’s, this was my most-requested song. I think I learned it from Joe Hickerson (former librarian at the Smithsonian archive of folk song), or perhaps it was Michael Cooney. As a frequent rider of the Boston public transit system, this was a natural fit for my shows back then.

8. The Court of King Caractacus

At the Fox Hollow Folk Festival in the 1970’s, Kelly and Kerry learned this from the singing of Mark Rust. Florence Brunnings told me that it can be heard on a record by Australian singer, Rolf Harris.

9. The Clouds Gonna Roll Away

Doc Watson did this Carson J. Robison song while playing harmonica and guitar at the same time. I swiped the harmonica break and chorus from Doc, but brought in various other floating stanzas from other traditional songs.