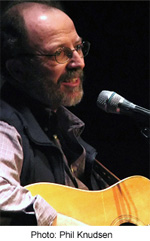 Tom Smith’s songs are in turns humorous, touching, thought provoking, and inspiring. Deeply rooted in the old-school folk tradition, his timeless stories are told with a voice that is honest and sincere with melodies that you will remember forever.

One fanciful fan put it this way, “If you could combine the DNA of Pete Seeger and Woody Guthrie with that of Robert Frost and Kermit the Frog you would end up with someone very much like Tom Smith.”

In the words of noted WUMB-FM Boston radio DJ, Dave Palmater – “Contrary to what a lot of people think, folk music is still a living tradition. It’s a living tradition that feeds on new songs that speak of people’s wants, people’s needs, people’s struggles and people’s triumphs. Tom Smith is more out of the tradition of say Pete Seeger and Tom Paxton than Jackson Browne or Connor Oberst. He’s a man who writes songs that seem like they’ve always been there. There are very few songwriters working today that I would call folksingers, but I would call Tom Smith a true folksinger.”

Veteran singer/songwriter Barbara Kessler writes, “Tom Smith will make you laugh and cry (maybe even in the same song) – a very captivating songwriter and performer.”

Tom grew up in rural Pennsylvania in a family where music was part of the fabric of everyday life. As a young man living at the epicenter of the folk-quake that was Cambridge, MA in the 1960’s, Tom solidified what has become a life-long love of self-made music. Now a folk veteran of over forty-five years, Tom performs at festivals, coffeehouses, schools, and concerts throughout the Northeastern United States to audiences large and small, young and old.

In Tom’s popular monthly blog The Kitchen Musician, going strong since 2007, Tom uses his music to reflect on modern life.

Apples & Cheese (2021) New and used songs for kids and their grownups.

Planting in a Drought (2020) New songs of struggle, protest and encouragement.

“These are the seeds that will keep us surviving!” ~ Matt Smith, Club Passim
“Tom Smith’s songs are just what we need more of – especially at this time. He’s carrying on where Woody and Pete left off.” ~ Chris Lavancher, award-winning songwriter.
“Tom Smith’s latest CD Planting In A Drought is a masterwork of folk idioms, protest songs, and lyrical truths.” ~ Bill Copeland Music News

Journey Home (2011)
“Tom Smith’s CD Journey Home offers emotional joy and solid craftsmanship. Smith has certainly come up with one of the strongest singer-songwriter CDs of 2011. Every word and feeling is a treasure and the song craft shows true mastery.” – Bill Copeland Music News

Peace on Peabody Hill (2008)
Informal family-friendly recordings made for my granddaughter and her parents. For more information and a free download please visit this link.

If You Want Any More You Can Sing It Yourself (1979)
This album is long out of print, but responding to requests from folks who loved these songs as children, and now want to share with their children and grandchildren, I offer it for free download at this link.

Tom also shares many informal home-grown recordings in his Jukebox.

Thank you for dropping by to visit! Come back often. Leave a comment or contact me offline.