Let’s talk about how venues and artists can build a mutually beneficial and supportive community. I’ll give you two examples from a recent open mike at Amazing Things Arts Center, featuring my poet friend Bill Thibodeau and musician friends Ruthann and Sam Baler. Step into the kitchen. I’ll put the kettle on! 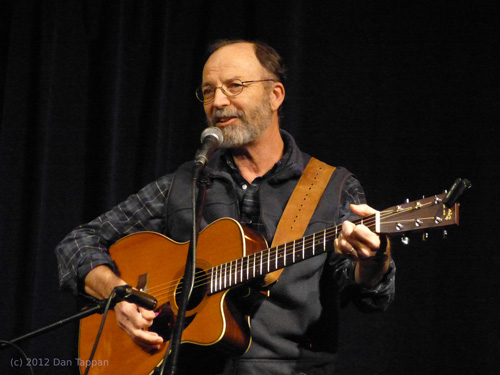 It sure has been a tough January and February for the Kitchen Musician. Two colds and several intestinal bugs kept me out of circulation. Two huge snow storms certainly didn’t help the situation either. But today, after removing two feet of new snow from our driveway, the sun is stunning! I think we are going to get out of this winter tunnel after all. New songs are already starting to blossom.

This Month’s Music
Inspired by a Poet

About a week ago my friend Ruthann Baler wrote to tell me that she had written a song using the words of Bill Thibodeau, a mutual friend. She knew that I had also written a song that was inspired by a Bill Thibodeau poem, and we enjoyed sharing our common experience. We agreed to meet at the Amazing Things Arts Center folk open mike that Thursday so that I could hear her debut the song, accompanied by her son Sam, guitarist extraordinaire. As luck would have it, Bill was also in attendance to read from his terrific new book The Watchman, Selected Poems. I had received an advance copy of the book and was honored to have been quoted on the back cover. The Watchman is a fantastic collection, so it didn’t surprise me that Ruthann was inspired by it.

Happily, the good folks behind the sound panel that evening had the video camera rolling and agreed to let me share it with you. Among a host of great songs and poems by open mikers, Ruthann and I each sang our “Bill Thibodeau” songs. Then Bill kindly read his poems on which our songs were based. It was an extraordinary evening of serendipity that I have come to expect at Amazing Things.

How fortunate we are to live in a community of generous artists who inspire us with their passion to create. Amazing Things Arts Center has become a glowing example of the power of art to build community. From their mission statement:

The Amazing Things Arts Center will establish a thriving arts community deeply rooted in the belief that, “The arts are a rich form of communication that allows us to meet, understand and accept each other.” We will strive to nurture the human creative spirit by providing a welcoming environment where diversity and collaboration help to broaden minds, allowing us to cross boundaries and forge bonds.

Performing a song for the very first time in front of an audience can be a scary thing. That is why it is important to choose an audience who will respect you and give your song an honest listen, even knowing that it is a work in progress. For a community of artists, it is an honor to be in the audience at moments like this – to participate in the evolution of a song. This song may evolve further as Ruthann comes to “own it”, although it seems rather complete already. Sharing and hearing works in progress is part of the fun and excitement of open mikes. You never know when you will be part of something very special, like this evening was for me.

This is Bill Thibodeau reading the poem which inspired Ruthann to write her song. Bill is a member of the Carpenter Poets of Jamaica Plain: a group of men and women who gather after work once a week at a local pub to share their poetry about their trade and other matters. Along with his fellow carpenter poets, Bill has been featured on PBS, The Hallmark Channel, and in the Boston Globe. His latest collection The Watchman, Selected Poems was published in December. I recommend it highly.

Annie on the Stairs

Click the image above to play the video.
Annie on the Stairs, © 2010 Tom Smith and William Thibodeau

Annie on the Stairs is the song I wrote, based upon Bill’s poem of the same name. I love the images that Bill brings to this poem. Struggling to configure them into a song gave me an appreciation for the differences between songs and poems. To my ears, a song is often much more creatively constrained than a poem. Although there are times when I am frustrated by the constraints of songwriting, most of the time they give me a comfortable foundation – a frame upon which to sculpt my song. Compare my song to Bill’s poem below.

Click the image above to play the video.
“Annie on the Stairs”, © 2012 William Thibodeau
“The Watchman, Selected Poems”, Two Boats Gallery Press
Used with permission

Find a place where artists gather, and join them!

April 10, Wednesday, 7:30 pm, Hudson, MA. Songwriters in the Round, an event sponsored by the Rhode Island Songwriters Association, and hosted by Dan and Faith Senie. Also appearing are Patti DeRosa and Paul Pasch.

April 12, Friday, 7:00 pm, Rindge, NH. I will do the feature set at the Meetinghouse Stage Open Mike, hosted by David Lister.

April 21, Sunday, 8:30 pm, Concord, MA. I Join my good friend and poet, Cheryl Perreault and a gaggle of talented folks to assist her feature set at the Emerson Umbrella Center for the Arts open mike.

My first acquaintance with Amazing Things Arts Center was in 2007 when I attended an open mike. Amazing Things was young then, and housed in an old storefront in a strip mall. But the spirit of community building through the arts was evident right away. Some of the folks I met that first evening have become very good friends and fellow music makers. Amazing Things is now housed in an old firehouse and the positive energy has accelerated. But it takes a lot more than positive energy to run a place like A.T., and public funding has all but dried up completely. So it is run by hundreds of energetic and creative volunteers, and the money it gets from sponsors and members. I invite you to join me and become a member, or consider a tax deductible donation.