Jan. 14, Monday, 8:30 pm – 9:00 pm at Emerson Umbrella Center for the Arts, Concord, MA. I am doing a 30 minute set as one of two feature performers at this open mike. Admission is $5, and there is a “pass the hat” donation for the performers. The co-feature this evening will be October’s Dream, a six-person folk group. Music starts at 7:30 pm, so come early to enjoy the open mike performers too.

Jan. 30, Wednesday, 8:00 pm – 9:00 pm, Main Streets Market & Cafe, Concord, MA. Free admission. This evening, I am performing as the guest of High Sierra, a six-member folk group who will start the evening of music at 7:00 pm, and then follow my set until 10:00 pm. If you would like to come for supper, I suggest you call ahead for a reservation.

In order to satisfy the growing clamor for more ways to hear my music (cough cough) I have created both a MySpace and a YouTube page. Come on down and “friend” me. Don’t you love how nouns are the new verbs? I think right after I send this newsletter, I will auto on down to Mocha Java and latte. 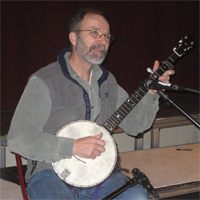 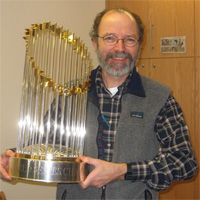 One of my Park School students took this photo of me singing “Springfield Mountain” at morning meeting last week. We had fun singing several different versions of this great old American folk ballad, one of which is called “Rattlesnake Mountain” – a bit of a tongue challenge. Here is one of my folk music heroes, Sam Hinton, singing a sample of it from his wonderful 1966 Folkways recording, “The Wandering Folk Song”. Perhaps a future newsletter will feature Sam.

Unrelated to music, I just have to share a photo of me holding the world series trophy, won by the Boston Red Sox last season. The trophy visited Park School as the guest of Rob Crawford, Vice President of Red Sox Nation. For those of you who don’t know the multi-talented Rob, he is also Director of Development at The Park School and author of the hit song, I’m a Member of Red Sox Nation. Holding that trophy mysteriously summoned the spirit of my departed father-in-law, who was with me the rest of that day. It felt good to have that old Red Sox fan at my side again. Magical.

I will spare you the pain of enduring jokes that are as old as that fruitcake in my cupboard. You all know the jokes any way. But since we are at the end of the twelve days of Christmas, I couldn’t resist including one of my favorite old humorous Irish songs on the subject. 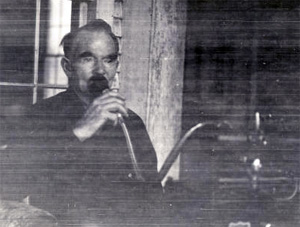 Recently, I discovered in the Library of Congress the original sheet music for this song, written by C. Frank Horn in 1883. You can also find the words and a MIDI recording of the original at Hymns And Carols Of Christmas. My version differs somewhat from the original, as it passed through several singers before it reached me. The tune I threw in at the end is “The Irish Washerwoman.”

If you would like to learn more about Helen Hartness Flanders, please check out my November 2007 Kitchen Musician.

Wishing you peace and music in 2008 and beyond,