Welcome to the March 2008 issue of The Kitchen Musician, my folk music newsletter, featuring my new song A Song for Ellen, written in honor of my good friend and patron of folk music, Ellen Schmidt. 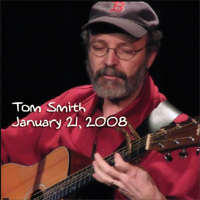 At The Center for the Arts, Natick, MA
Photo by Phil Knudsen

March 11, Tuesday, 8:00 pm at Sweet Bites Bakery & Cafe, 5A Spruce St. West Acton, MA. As the co-feature performer, I will play a 30 minute set followed by 30 minutes from the very talented blues musician, Lloyd Thayer. Open mikers start at 6:30 pm. Admission is $5 plus “pass the hat” for the feature performers. Click for directions. If you come, make sure you save yourself for dessert (yum!).

In addition to recording an upcoming broadcast for Norwood Cable TV, I have made the playlist for WERU, community radio for Bangor and Blue Hill Maine. Several of their shows have been playing my “Talking Post-Trauma Blues”, which is approaching 37,000 hits on YouTube and continues to get frequent plays on Neil Young’s Living With War Today web site. This barrage of media attention is making it very difficult for me to remain humble. So far I have avoided getting sunglasses and an electric guitar, but it is a struggle.

This song is the result of an imagined interchange between my friend of 34 years, Ellen Schmidt and the producers of National Public Radio’s This I Believe, where “Americans from all walks of life share the personal philosophies and core values that guide their daily lives.” Of course, in my imagination Ellen replied to their request with a song. I think I can be forgiven that my song puts words in Ellen’s mouth, especially since a fair number of them came from, or were inspired by the lyrics of her own songs. I would sum up Ellen’s personal philosophy with the phrase, “You are what you sing”. Ellen says of her music, “I want my songs to help people find the best in themselves.” … a target she never fails to hit. 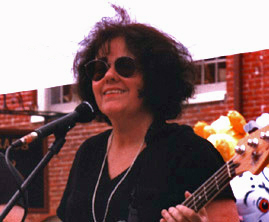 Last month I had the honor of joining a wonderful collection of musicians to perform at a surprise birthday party for Ellen. A musical fixture here in New England, she has been writing and performing music since Old Joe Clark was new. Ellen and her musical collaborator Jake Kensinger, host frequent open mikes throughout the Boston area. She has been instrumental (no pun intended) in a great many of us finding our musical voices. I have heard Chris Pahud say that the majority of Boston area folkies owe their first or second gig to Ellen. I don’t doubt it. 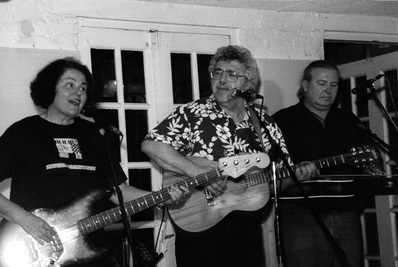 Ellen Schmidt, Jake Kensinger, Steve Sadler at Club PassimTwo for the Show. It is not possible to go to a Two for the Show performance and leave feeling low down. Highly recommended.

My first memory of Ellen was when I was just learning how to play the mandolin. We were at a singing party of the Folk Song Society of Greater Boston, of which she was the president. She heard my plunking and clunking in a remote corner of the room. Undeterred by my obvious struggles, our conversation went something like this, “Hey, we are pulling together a group to perform a tribute to Woody Guthrie. It is called Bound for Glory after the title of his book. We need someone to play Woody’s Rag on mandolin, and you’d be perfect. What do you say?” What I said was “<gulp> er… OK”. How could I not? In two months, I was on stage at the Fox Hollow Folk Festival, singing and playing for hundreds of Woody Guthrie fans.

Ellen’s new CD, entitled Joy, will be released next month. She is celebrating with a CD release party on April 6th at the Trinitarian Church in Concord, MA. Click here for details. With Ellen’s permission, I have included below a preview of one of her songs that will be on the new CD.

Ellen and Jake are hosting the open mike at Sweet Bites Bakery and Cafe, where I will be featuring on Tuesday, March 11. Come on down. This will be fun. And if you get there by 6:30, I think you can bet on Ellen encouraging you to sign up to sing a song.

Wishing you peace and music,