Welcome to the January 2009 issue of The Kitchen Musician, my monthly folk music newsletter, featuring The Writer, a poem by Richard Wilbur… and contributions from each of my three children. 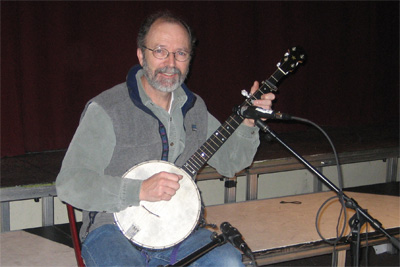 As we turn the page to a new administration and a new year, many of us have high hopes that our troops will return soon from Iraq and Afghanistan even amid news that the war is expanding in Afghanistan. Recently I learned about Brandon Friedman’s book, The War I Always Wanted: The Illusion of Glory and the Reality of War. I was encouraged when Mr. Friedman, a veteran of both Afghanistan and Iraq, suggested my song, Talking Posttrauma Blues, saying “Many artists who try to capture the PTSD experience end up creating something that seems forced and cheesy. I thought this one was different.”

Last month I recorded a family-friendly CD for my granddaughter Anna for Christmas. I call it Peace on Peabody Hill. Although intended solely for Anna and her parents, I decided to make extras to sell to benefit Tunefoolery. You can get it at my gigs “while supplies last”, or order it online. Although fun and a bit light-hearted, it is definitely not a “party CD”. I envision Anna’s parents playing this peaceful music in the play room, during bath time, or while getting ready for bed.

This month’s music was recorded in November at the studios of HCAM-TV in Hopkinton, MA. My friend Cheryl Perreault hosts Wake Up and Smell the Poetry, a wonderful way to spend a Saturday after a busy week. If you are in the area, sign up for their mailing list and to share your poetry or music on the show. In each show, Cheryl has several featured guests plus an open mike for those who want to share their own poems, spoken word, or music.

Richard Wilbur is a former poet laureate of the United States. Some have described his poetry as following in the footsteps of Robert Frost. In my opinion, there are poetically no better footsteps to follow. You can read this poem and listen to Richard Wilbur read it in last month’s issue of Harvard Magazine.

Margo and I are blessed with three wonderful children. Now that they are fully grown, I look back and shiver at the awesome task of raising children in a world that seems to put barriers in the paths of parents. Sometimes I wonder how it happened to turn out so well. Now that we have a grandchild I marvel at the way my daughter Heather and her husband Doug take up the loving, selfless task to raise their own child while balancing two careers in a sharp-edged world.

Richard Wilbur says his poem “The Writer” looks back at a time when his daughter Ellen, now an accomplished fiction writer, was in junior high school. It speaks to me as a father who at times didn’t understand the special challenges that our adolescent children experienced. I have vivid memories of listening to Heather, our oldest daughter, as she worked in her room to write prose and poems. Next month, she will have her second article published in the prestigious New England Journal of Medicine. Here is her description of a family Christmas, written when she was in junior high school.

The afternoon begins at two o’clock, when my grandparents, whom my mother always instructs to arrive at three, and my Aunt, Uncle, and cousins, whom she directs to show up at one, pull up the icy driveway that leads to our house. As the inundation of relatives streams into our house, the wild rumpus of bear hugs, slaps on the back, and tousled hair of fast-growing nephews begins.

The hullabaloo continues until somebody realizes that the food being brought in will become cold if it isn’t popped into the oven within thirty seconds. We let the creamed onions simmer and the turkey broil, as our horde slowly migrates into the living room to snack upon the goodies left over from Santa’s late night visit. Our conversations during these moments of family bonding can range from an argument about who has the most bushy eyebrows to the singing of our favorite Christmas hymns.

As the tantalizing scents of the feast drift into our colloquium, our stomachs initiate a relocation to the kitchen. We help ourselves to the banquet served buffet-style then congregate in the dining room. The first moments of silence occur when we are all seated, hand in hand around the table, ready to say grace. We sing “Dona Nobis Pacem” and “Amazing Grace,” guided by my father’s clear, cool tenor and eventually our grace becomes the jumbled harmony of the booming bass of Pop-pop, my tone-deaf grandfather, the identically loud, enthusiastic yodels of my mother and her twin sister, the giggles of my little sister and cousin, the sweetly shaking maternal hum of Ga-ga, my grandmother, the howls of four family dogs, ranging from Rottweiler to Shih Tzu, and the contented mess of the rest of us.

A moment of serenity follows our benediction, and with the wink of my Uncle a din of laughter, munching, and clinking silverware erupts, bursting through the silence. During the meal, toasts are made, congratulations given, and jokes cracked. After everyone has been sufficiently stuffed with a third or fourth helping, my Aunt brings out Jesusâ€™ birthday cake. We settle down for long enough to sing Him a hearty round of â€œHappy Birthday,â€ then dig into the cake as if we haven’t received any dinner. After devouring the last crumb, we gather around a crackling fire to sing Christmas carols and open presents.

We present gifts with hugs and jocularity which lead eventually to drooping eyelids and yawns of contentment. As our celebration draws to a close, we all tiptoe quietly upstairs to our assigned sleeping areas to collapse for the night, leaving stacks of dirty dishes waiting for a kind little elf who somehow always manages to get them clean by morning.

Our son Andrew expresses his creativity visually and by building things. When we got him his first DV camera at age twenty, he of course greeted the muse in our kitchen. Where else would you expect the muse to greet the son of a Kitchen Musician? Here is his first creative effort during that Christmas week. Today he works as a motion capture engineer in the film industry.

Mally, our youngest, is a talented writer, singer and dancer. I admire her tenacity as she struggles to find her voice, composing music with her guitar. Mally’s musical taste is impeccable. I value her as a collaborator. “Mally, this second verse doesn’t work. What would you do here”? When our opinions differ, I usually follow her advice. A while ago she overheard Margo and me talking nostalgically about the blizzard of 1978. We described how we were housebound for two weeks and skied into Harvard Square from Belmont where we lived at the time. She was fascinated by our description of how we got to know our neighbors in a way not possible during our busy non-blizzard times. Of course, Mally turned it into a song. This is the happy result, recorded during a recent house concert in Boston, MA. You can learn more about Mally and her music at MallySmith.com.

While on the subject, a couple weeks ago we in New England experienced an impressive ice storm. Jaffrey, NH, where we spend pleasant times in our woodbound cabin, was on the national news several days running as ice laden trees collapsed and caused massive power and communications outages throughout the Monadnock region. Even now, weeks afterward, our New Hampshire neighbors are without power. Two days after the storm, I drove our trusty 4-wheel drive Subaru around downed cables, power company poles and trees to check out the damage to our cabin. We are more fortunate than our neighbors. The cabin suffered only minor damage, though the debris will keep local folk employed for many months of cleanup. Here is a video view from the driver’s seat as I drove down Peabody Hill on that day.

Wishing you and your loved ones a New Year brimming with peace, joy and love, and I also hope you find a good use for that fruit cake you received from Aunt Maude.

Jan. 17, Saturday: I am honored to play a set of mining songs at The Anthracite Heritage Museum in Scranton, PA to commemorate the 50th anniversary of the Knox Mine Disaster. I will sing several traditional mining songs, plus Swallowed by the Hole, my original song which was based upon interviews with survivors of this disaster.

Jan. 17, Saturday: If you can’t make it to Scranton on the 17th, I highly recommend The Amazing Things Arts Center where my daughter Mally Smith will open for the wonderful Bill Morrisey.

Jan. 24, Saturday evening: My daughter Mally and I will be at Savoury Lane, in Acton, MA. This is a nice place to have a budget-friendly meal and listen to acoustic music. Mally and I will split the evening with Ergo Canto, a duo who perform a variety of original and traditional folk songs.

I first learned about Tunefoolery via Rusty Browder, who was then the librarian at the school where I work. Her daughter Emily Browder is a talented musician and educator who lends her gifts to the Tunefoolery members.

About Tunefoolery
Tunefoolery Concert Ensembles from Cambridge, Massachusetts is a unique and courageous group of over 50 musicians with psychiatric disabilities who play and perform music as a way towards healing and recovery. We perform in ensembles and solo acts (folk, classical, blues, rock, showtunes, etc.) mostly for other consumers of mental health services and social agency clients, but also for the general public, bringing hope and inspiration to thousands of other consumers every year. We also visit schools and other institutions where we educate children and adults about the talents and vast capabilities of people with psychiatric disabilities. – Tunefoolery.org

All of the proceeds from the sale of my “Peace on Peabody Hill” CD will go to benefit Tunefoolery. My goal is to send five members to music camp this coming summer. Thanks to generous contributors, I am well over half way there!