Welcome to the February 2009 issue of The Kitchen Musician, my monthly folk music newsletter, featuring A Single Room, my new song about the working poor. 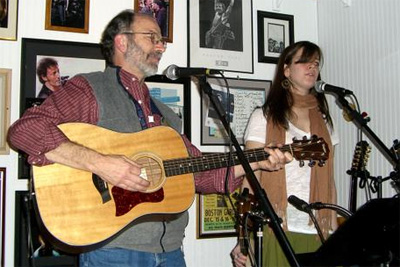 Mally and my performance at Savoury Lane last month received a little attention on Wicked Local. It has been fun to hear from some long absent friends who called to say that they read the review by Margaret Smith (no relation).

I am very pleased to report that sales of my family-friendly CD Peace on Peabody Hill reached my initial goal of $1000 to benefit Tunefoolery. Phase 2 is to defray some of my expenses. If you would like to contribute, please visit my online store, or pick up a CD at one of my shows.

On my trip to Pennsylvania last month, I was listening to Pete Seeger at 89, a wonderful CD my wife Margo gave me for Christmas. Ironically, at exactly the point where the last song ended, I approached the exit for Beacon, NY, the home of Pete Seeger. I felt an overwhelming urge to exit the highway and share a cup of tea with him. Reaching the center of town, my good sense returned. Instead, I went to the post office and asked the post master to help me send one of my CD’s to Pete. In the envelope I placed the note, “Please accept this gift, given with respect and admiration, in return for the many gifts you have given me.” I didn’t know then, but at that moment Pete was on his way to Washington, DC to sing at the huge Jefferson Memorial concert for the inauguration of Barack Obama. Pete is an inspiration. 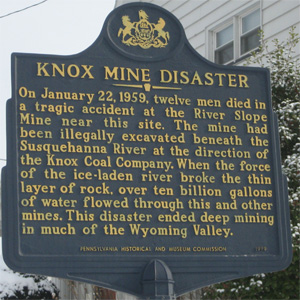 I have sung folk songs for a very long time. Many have a historical context. When I sing them, I feel close to their subjects… the Texas Rangers, the early settlers, ordinary people who have experienced extraordinary things. Though the music brings me closer to the subjects, these songs are still historical and abstract for this twentyfirst century singer.

Last month I had the honor to sing several mining songs at the Anthracite Heritage Museum in Scranton, PA. The event commemorated the fiftieth anniversary of the Knox Mine Disaster. The program director saw my song Swallowed by the Hole on Youtube and invited me to sing it for this anniversary program. For a singer and songwriter, this was one of those very special opportunities to sing one of my own songs for the people who are the very subject of the song. I was a little frightened at the prospect.

You can view my song and learn more about the Knox Mine Disaster in my July 2008 Kitchen Musician.

The room was set up with 150 chairs. Every chair was filled, and even more people stood against the walls. It was a dramatic moment when family members of the twelve men who were lost in this disaster were asked to stand. When the family members of the sixty nine survivors were added, that was easily more than half of the audience. Among them was John Gadomski, the last surviving miner.

My singing took on a special meaning to me as I saw many in the audience cry as my song told the story of this disaster. This feeling spilled into my other mining songs – songs I have sung hundreds of times previously as only an interested historian. It brought home to me the true strength and healing power of song.

UPDATE: The name of this song has officially changed to ‘Working Poor’, as published on my 2011 CD ‘Journey Home’. You can hear what it sounds like on my album, below.

I am taking a five session songwriting workshop with Bob Franke, a “grand master” songwriter. I recommend his live shows and recordings. In our first session Bob told us that he writes songs “to have fun and to heal”. By “healing” Bob is referring to the healing of one’s self and one’s community. These sentiments, having fun and healing, resonate with some of my recent songwriting, so I started the workshop expecting to re-energized my efforts. I haven’t been disappointed.

Bob’s assignment for me was to write a song about the room I shared with my older brother when we were young. Usually, I just hang around and wait for the muse to knock on my door. Now I had been asked to go out and knock on the door of the muse to boldly ask for inspiration. And what is all this talk about healing? Where does that come in when writing a song about a bedroom? 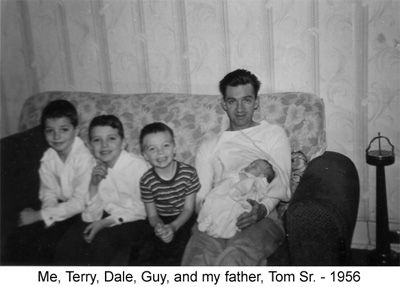 When I was seven years old, the so-called age of reason, I lived with my parents and three brothers. My youngest brother had recently joined the family. As I described in my newsletter about the Knox Mine Disaster, the area where we lived was economically depressed when the mining industry failed. Unemployment rates resembled the Great Depression of the 1930’s. Like many others, my father was in and out of work. My parents struggled to keep us afloat. Dinner of macaroni and butter was common. All six of us slept in the same bedroom. Times were hard. In my mind, I revisited that bedroom, feeling the breath of my brothers as we slept, their knees against my knees, and listening to the hushed conversations of my parents.

Growing up, I was not very close to my father. Recently when a friend asked about our relationship, all I could say was “I loved him, but we had our differences”. An odd thing happened as I revisited that crowded bedroom. I began to develop a closeness with my father, and a sympathy for his circumstances as a young parent struggling against overwhelming odds. Perhaps this was enhanced by a public radio show in which several recently laid-off folks were interviewed. I learned about how some of them survived by the poor wages they got at the day labor camp. It seemed that wherever I looked this week, friends and acquaintances were getting laid off.

Here is a description of Larry’s experience with a day labor center in Nashville. I found it especially compelling.

Thank you for the inspiration and guidance, Bob. Yes, this is a healing song. Thanks also to my new songwriting friends, who offered some good suggestions about the first draft of “A Single Room”.

Wishing you peace and music.

February 25, Wednesday, 5:00 pm – 8:00 pm: I will be a guest of Bettie Carlson in the studios of WCUW-FM, Worcester on the “In The Tradition” show. Bettie and I will “talk folk music”, and I get to play a few songs. Listen live at WCUW.org.

February 28, Saturday: My daughter, Mally Smith and I will share the evening at The Federated Underground Coffeehouse at the Federated Church of Ashland, MA. The show starts at 7:00 pm and runs until 9:00 pm. Click for directions. I am looking forward to this one.

March 6, Friday: I will perform a concert at the Mariposa Museum and World Culture Center, in Peterborough, NH at 7:00 pm on Friday, March 6, 2009. Peterborough is a pleasant two hour drive from Boston. This is one of their First Friday concert series. Please click for directions. This concert is free. Come early and tour the museum.

March 12, Thursday: I am the feature performer at the Rose Room Review, upstairs at the Rose Garden restaurant and pub, Upton, MA. Music begins at 7:30 pm, and my half-hour feature set starts some time later in the evening. This pub has a nice budget-friendly menu. Come join me! Click for directions.

Neighborhood Action is a program of The Church of St. John the Evangelist, Bowdoin St., Boston. My memory of serving dinner there influenced this month’s song. Click here to volunteer.