Welcome to the March 2009 issue of The Kitchen Musician, my monthly folk music newsletter, featuring Old Bangum, an old traditional song… and a photo of the very last snow shovel in Boston. 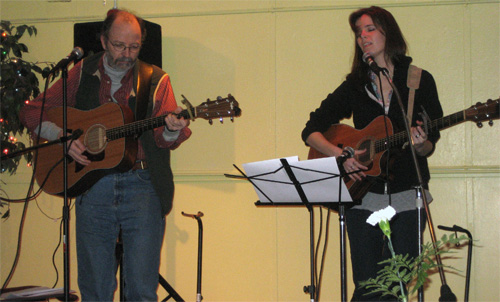 It was a great pleasure to share an evening last week at the Federated Underground Coffeehouse in Ashland, MA with my daughter Mally. It is a joy to hear her music and watch her performance mature. We enjoyed performing as a duo, and separately. Although I have to give credit to Mally for exquisite renditions of her original songs, I can modestly say that the hit of the evening was my new song that contains the “F” word (a word that rhymes with “tart”). The family of pre-teen boys to my left infected the older folks in the room with unconstrained giggles. They made me promise to post the song in an upcoming issue of The Kitchen Musician. Watch for it!

“Old Bangum”, also known as “Wild Hog in the Woods” and several other titles, was recorded on the front porch of my New Hampshire cabin in the woods. This is a place where the image of a ferocious wild animal in the woods is not too far fetched. Though wild boar are rarely found in New Hampshire, we have had several close encounters with black bear. Fortunately, during this recording session the only wildlife I encountered were a few birds, which (if you have a good sound system) you can hear at the very end of the recording.

On Friday, March 6th, I will be doing a program of traditional folk music at the Mariposa Museum and World Culture Center, in Peterborough, NH. I am looking forward to getting back to my folk roots and sharing some of the great old songs I fell in love with when I first started performing folk music. I learned this version of “Old Bangum” many years ago from Karen Dietz. I met Karen at a singing party hosted by Ellen Epstein. Ellen is one third of the great folk trio of Kallet Epstein and Cicone. Ellen has a talent for gathering interesting musicians, mostly of the “traditional persuasion”. I have fond memories of her marathon singing parties. They would often start on a Friday afternoon and run all day and night until everyone left completely fulfilled and exhausted on the following Sunday evening.

“Old Bangum” is a variant of “Sir Lionel”, which Francis James Child designated as Child #18 in his collections of English and Scottish folk songs from the late 19th century. There are many variants as you can read in this discussion on the Mudcat forum. Here are a few of them.

An influential folksinger in my life has been Sam Hinton. This is a sample of Sam singing “Old Bangum” on his landmark Folkways recording I’ll Sing You a Story. Sam is the only person I have ever heard whistle AND hum “Frere Jacques” simultaneously, in a round. Amazing!

The Max Hunter Folk Song Collection at Missouri State University has this wonderful version as sung by Mrs. Pearl Brewer of Pocahontas, Arkansas, recorded in 1958.

Here is a version from John Jacob Niles, “Dean of American Balladeers”. Niles was influential in the rise of the folk revival of the 1950’s and 1960’s here in the United States. His songs were sung by the likes of Joan Baez, Peter Paul and Mary, and Burl Ives.

Wishing you a life full of music, and your wildlife encounters enjoyable. 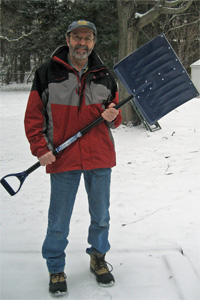 I see by the calendar that it is March and the “boys of summer” are getting ready for baseball in Fort Myers, Florida. But we here in Boston are in the middle of a snow storm which will drop more than a foot of snow. I just returned from Lowe’s Hardware where I bought the last snow shovel in all of Boston. Happy me. You New England folks deserve a winter break so treat yourself by joining me at one of my shows this month!

March 6, Friday 7:00 pm: I will perform a concert of traditional folk songs at the Mariposa Museum and World Culture Center, in Peterborough, NH. Peterborough is a pleasant two hour drive from Boston. Please click for directions. This concert is free. Come early and tour the museum.

March 12, Thursday 8:00 pm: I am the feature performer at the Rose Room Review, upstairs at the Rose Garden restaurant and pub, Upton, MA. This pub has a nice budget-friendly menu. Come join me! Click for directions.

March 16, Monday 8:00 pm: Several other musicians and I will assist my friend Kate Chadbourne in an hour of Irish music to honor Saint Patrick’s Day. Kate has a deep knowledge of Celtic music, both academically and from personal life experience. This will be a lot of fun. Come join us at the Emerson Umbrella in Concord, MA. Click for details.

March 27, Friday 7:30 pm: I am honored to join my friend Kurt Winikka to help him celebrate the release of his first CD at the First Church of Cambridge, in Harvard Square. Kurt and his band will of course be the center of attention at this celebration. To help round out the evening, the very talented and engaging Kate Chadbourne and I will each do a guest set. Click for details.

“Bikes Not Bombs promotes bicycle technology as a concrete alternative to war and environmental destruction. For 25 years, BNB has been a nexus of bike recycling and community empowerment both in lower income neighborhoods of Boston and in the nations of the Global South. BNB’s programs involve young people and adults in mutually respectful leadership development and environmental stewardship, while recycling thousands of bicycles.” – Bikes Not Bombs

I have seen first hand the positive contributions made by Bikes Not Bombs. Several young friends have rebuilt old bikes that they then owned. They also rebuilt bikes that were sent to worthy recipients in South America, rather than to the landfill. Parts from bikes that can’t be repaired are sometimes configured into machines that are used to grind corn or pump water. Please join me in supporting the good work of Bikes Not Bombs.