This month I asked the TomSmithMusic.com archivist to share a rare video from 1985. Have you ever wondered what I looked like before I became “hair free”? Come on into the kitchen. I’ll show you. 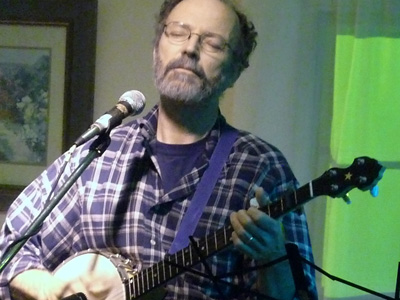 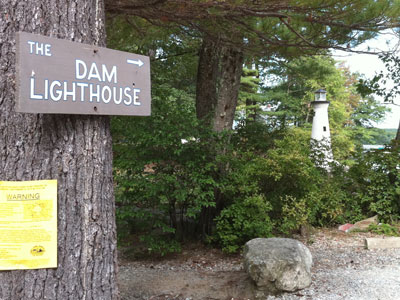 I am getting pumped for my show this coming Wednesday, October 6th at Amazing Things Arts Center, where I am the featured “comedian” (quotes intentional) at the monthly comedy open mique. This is an unusual program for me, and preparing for it has caused me to look for humor in nearly everything I see. Last week prior to arriving at Seth Connelly’s Humming Lake Studio where I am recording my forthcoming album of original songs, I made a brief stop at Lake Potanipo to do some vocal warmups. When I stepped out of the car, I saw this sign and it took me about five minutes of quiet chuckling before I could concentrate on the warmups. This is probably a good visual representation of what my program will be like at Amazing Things… sort of a Will Rogers meets Mr. Rogers kind of show. If you like folksy humor in song and story, combined with some unusual instruments, please join me. Click for more details.

I am sharing this video even at the risk of embarrassing my daughter Mally at the sight of those fashionable white socks, with pants stylishly hiked up so that they can be in full view of my audience. 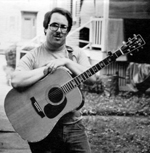 At several shows this month I will be singing traditional songs, so I decided to dive into the video archives to post an old song I recorded twenty six years ago with my good friend Mickey Levine. In 1985, Mickey and I did an hour-long performance and interview on a television show entitled The Unicorn Coffeehouse, hosted by Jerry Vovcsko. I recently unearthed what I thought was a long lost video tape of that show. This is one of the songs we performed that day.

Mickey and I toured as a duo from about 1977 until 1986 (did I get those dates right Mickey?), when he and his family relocated to the Pacific Northwest. He appeared on my first two albums of music for children. We used to say that all of our rehearsals took place on stage at our shows. We worked hard to retain that natural unprofessional folk presence.

Mickey is a versatile musician. When we first met, he was playing in a bluegrass band, but he is also an excellent rock, jazz and folk musician. When I invited him to share the stage at the Nameless Coffeehouse in Harvard Square about 1977, I never expected that he would immediately become my “go to” sideman for the next decade. He’d find just the right accompaniment with guitar, mandolin, banjo, dulcimer or keyboards.

I first heard “The Captain With His Whiskers” about 1979 while on a short tour with Mickey in Pennsylvania, New York and Western Massachusetts. Our Montrose, Pennsylvania show had a large number of residents from the local senior center of this rural village. One member of the audience was Helen L. Ainey, an eccentric woman who looked to me to be about eighty years old. After the show, she was insistent that she share with me a song she learned as a young girl from her grandmother. Her grandmother had said that she learned it when she was a little girl. Some quick math put the song in the vicinity of the American Civil War. Ms. Ainey gave me a great gift that day.

Since I made this recording, I learned that this song has its origins in an English song entitled “O They Marched Through The Town” circa 1820, words by Thomas Haynes Bayly and music by Sidney Nelson. That version did not mention the whiskers. In 1941, Frank and Anne Warner collected this song in Jaffrey, NH (where I spend many happy days during the summer) from Lena Bourne Fish. Mrs. Fish said, “In the good old days whiskers were deemed to be an emblem of strength and manhood. So if a girl had a lover well bewhiskered it was considered to be a thing to take pride in.” I’ll have to make sure I mention this to my wife, Margo. According to the Warners (Traditional American Folk Songs, © 1984, Syracuse University Press) whiskers became popular among military men during the 1850’s, about the time when Ms. Ainey’s version of the song became popular.

One can’t do much better than have a life full of banjos and old folk songs.

Oct. 6, Wednesday, 7:30 pm A special (and unusual) show as the feature artist at the Amazing Things Arts Center Comedy Open Mique. Yes, I will get my sillies out and would love to have you join me.

Oct. 14, Thursday, 7:00 pm Supporting Jane Fallon as she records a new live album at the venerable Bull Run Restaurant in Shirley, MA. Jane has enough pre-sold tickets to book the large performance space, so there is room for walk-ins. Come by 6:30 and order dinner. Excellent menu, and a lot of musical collaboration with a good friend.

Oct. 30, Saturday, 8:00 pm What a treat to be included in a special concert to benefit the Folk Song Society of Greater Boston. I will support the talented Celtic musician and scholar Kate Chadbourne and a gaggle of musicians. I am looking forward to this one.

The Folk Song Society of Greater Boston is celebrating its fifty first year! When I first arrived in Boston, they scooped me up and gave me a community of fellow lovers of traditional and old-time music. From their web site:

The Folk Song Society of Greater Boston is a non-profit organization of people interested in folk music: its traditional origins and sources and its current expressions. We are dedicated to providing opportunities for everyone to make, enjoy, and support this music.

If you live in the Boston area, join me and click here to become a member.