I start the new year with a new song that is the product of a songwriting suggestion by my good friend Dan Cloutier. Lots of upcoming shows to tell you about too. Welcome to my kitchen! 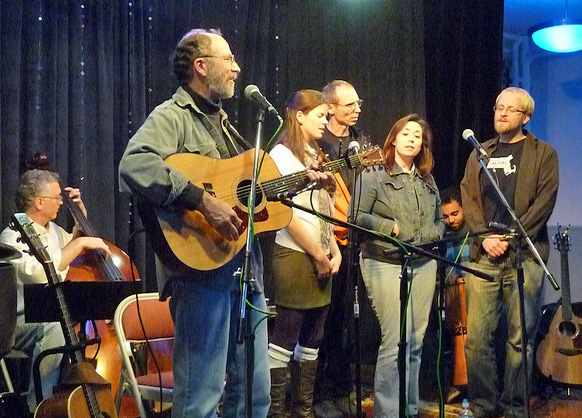 The Kitchen Musician rarely misses a month, but somehow December came and went so fast that it was gone before I knew it. The Smith family had a great holiday break with all of our children in the same house at the same time – something that is rather rare these days. My performance calendar also seemed to blossom with many memorable performances. Two special concerts included my musical partner Seth Connelly, and other shows included a growing family of musical co-conspiritors.

I was honored to be included on “Our Finest Gifts” – a holiday CD sampler of Boston area folk artists. This CD is the product of volunteer efforts by Jon Waterman, Dawn Kehoe Frost and Steve Rapson and its launch was accompanied by four local concerts. All of this work to benefit SmallCanBeBig.org.

I spent a memorable afternoon as the guest lecturer at Laselle College to discuss and demonstrate how folk music humanizes and deepens our perception of history. This was a special invitation by Professor Lorraine Lee Hammond – someone who is respected as a folk musician, scholar and dulcimer “goddess” for about four decades. It was a genuine pleasure which I will hopefully repeat.

December also was witness to two memorable evenings at the Lizard Lounge in Cambridge – once to open for (and collaborate with) my daughter Mally’s band The And Company, and the following week to win the Lizard Lounge Open Mic Competition for the third time.

Although I didn’t post a December issue of The Kitchen Musician, I did get a chance to post my first contribution to We Support Local Music. This blog is a nice collection of thoughtful contributions from folks who love and support local music and spoken word.

While we are thinking about supporting local music, how about locally grown produce? A colleague of mine, Jon Ross-Wiley, has a website called Local In Season that is up for a “Best of Twitter” award and he could really use your nomination if you have a Twitter account. Local In Season is a site that supports and celebrates local foods and seasonal cooking. Please use this link to nominate his site and be sure to complete the “…because…” statement otherwise they won’t count the nomination! Thanks, and please help Jon spread the word!

Click the image above to play the video, recorded in my home. 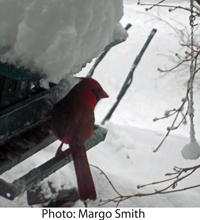 As I write this, outside a snow storm has dropped over a foot of snow – so far. This cardinal outside the kitchen window says, “Thank you for filling the feeder!” The school where I work has been cancelled for the day. Ordinarily this is a time for sleeping late and lazy play. Unfortunately, my gas powered snow thrower broke down this morning. Let’s do a quick calculation… Wet snow weighs about 12 pounds per cubic foot. Our driveway is 150 feet long, by 10 feet wide and there is 1 foot of snow on the ground. 12# x 150′ x 10′ x 1′ … hmmm…. my wife Margo, my son-in-law Doug and I just shoveled 9 tons of wet snow by hand in 3 hours… and snow continues to fall. I think I deserve to take tomorrow off too, don’t you?

A day with this kind of weather matches the theme of my new song quite well. My good friend and open mike host Dan Cloutier suggested to the songwriters of the open mike community at Amazing Things Arts Center that we write a winter waltz. Unfortunately, I was not feeling well on December 16 when all of the hooligans as they are known shared their winter waltzes. I understand that there were some real gems that were sung that night. Somewhat belatedly, this moth’s song is my contribution to the songwriting exercise.

I recall a rather cold and snowy December – my first in Boston. I was nineteen years old and feeling somewhat homesick for my home in rural Pennsylvania. The pace of life in Boston was rather foreign to me, and difficult to get used to. I wrote a letter to my mother to try to explain what I was going through, and to tell her how much I missed her and the farm where I grew up. I never sent the letter, but the act of writing it seemed to help me to get through a rough period.

Even today when my mother visits me in Boston, she can be heard to say “It’s not like the way it was on the farm, Tommy” when confronted with things like legally driving in the breakdown lane, huge shopping malls, confusing ATM machines, or other artifacts of modern city life. “The farm” was the house we rented when I was 7 years old until 15 years. It was indeed an old farm house with a barn and seventy acres of land. Although I worked for the farmer who owned the farm next door, we did not actually farm the land ourselves except for a very large garden that consumed most of my free time in the summers. The products of that garden and the fruit trees in our back yard were processed on our wood stove in the kitchen and then canned and stored on what seemed like endless shelves of quart jars. I have vivid memories of opening those jars in the middle of very cold and snowy winters. It was like opening a door to the distant past. The hiss of air as I broke the vacuum would release the smells of summer which seemed to warm me even before tasting the sweet contents.

This song conjures up some of those old feelings and memories of my first winter in Boston and my life on the farm, and it merges them with some more contemporary references. (When I was nineteen, computers were mostly products of science fiction.) Although “my life is now filled with computers”, I guess “I will always be part of the farm.”

Wishing you happiness, good health and a balanced life in 2011!

Jan. 16, Sunday, 8:30 pm, Somerville, MA This is not my show, but I’d like to make a special mention of the CD release party for my daughter Mally’s band The And Company. This is their first full length studio recording, and it is a beauty. Please join me in the audience for a special event in the heart of Bohemian Somerville. Click for map and directions to The Burren.

Jan. 20, Thursday, 7:00 pm, Ashland, MA I will record in the WACA-TV studios for the “Unplugged” television show, produced by Steve Rapson. It would be great to have you in the studio audience, especially if you are willing to obey the “applause” sign. Please contact me if you’d like to join us. 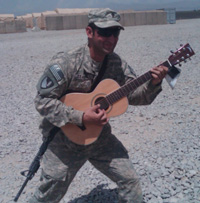 This month’s featured non-profit was suggested by my daughter Heather. Heather learned about Guitars 4 Troops from an NPR News Story (listen here).

“Army Sgt. Bob Persch had always wanted to learn how to play guitar. When he was was deployed to Afghanistan, he couldn’t find a guitar to play. His desire to play and help others, led Robin Webber at Guitar Gallery in White House, Tenn., to begin donating a guitar a week to U.S. troops in Iraq or Afghanistan.”

You can help by donating used guitars, money or other items. For more information, see Guitars4Troops.com.