Recently, I stumbled upon a photo that inspired a new song. This one hits close to home. As I looked at the photo, it seemed to give me the songwriting prompt, “Love will find a way.” Come into the kitchen and I will sing it for you. I’ll have lemon-ginger tea with honey, please. 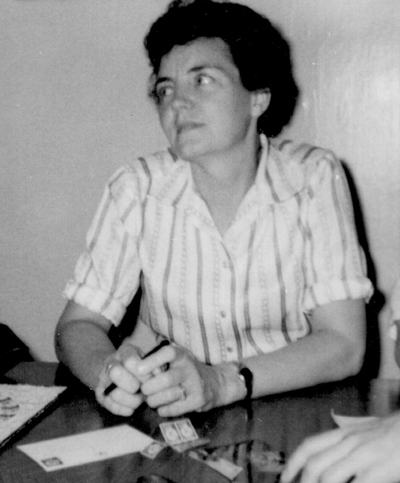 My mother, Carmen Smith, the letter writer (at age 35)
Twenty years after the events in my song took place

My daughter and music collaborator Mally Smith has recorded “free”, a new album with the help of talented Scottish friends. I have heard an early preview and it is WONDERFUL! As it enters the final stage of release, Mally has launched a crowd-funding campaign to pay expenses. Click here to help fund this project or pre-order the album. Lots of perks to choose from too. She is more than 75% to her goal!

This Month’s Music: “No Mail Today”

SPOILER ALERT: I suggest you listen to the song before reading the backstory below.

For those of you keeping track, I didn’t publish a Kitchen Musician in January and February. But this month I am happy to report that while cleaning up some files I discovered an old photo that re-energized my muse. It brought to mind a story my mother (Carmen) told me about how she and my father (Tommy) met, and their three year courtship by letter. 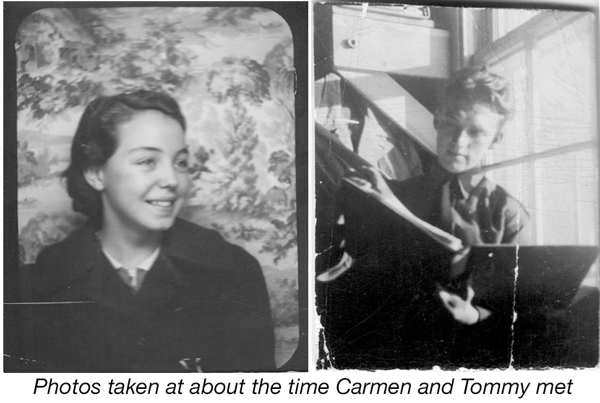 Tommy lived in Scranton, PA. Several days after Dec. 7th, 1941 (Pearl Harbor Day) he enlisted in the Army Air Corps. At twenty one years of age, he left his mother and six younger sisters (whom he supported) and shipped out to Spokane, WA where he had a few weeks layover before heading to the South Pacific. While in Spokane, Tommy went to a skating rink during some time off. He happened to arrive just at the time when a fifteen year old girl named Carmen Gauthier zipped by and fell flat on her behind. Tommy gave a laugh and asked if she was okay. (My mother told me that she was very embarrassed.) After he helped her up onto her skates, they struck up a conversation and over the next two weeks they developed a friendship. When he shipped out, they exchanged addresses. Of course Tommy’s address was encoded so that Carmen would never know exactly where he was.

Tommy’s tour of duty lasted three years. Their correspondence continued uninterrupted as Tommy moved from island to island across the Pacific. Sometimes letters were lost in transit, or arrived after very long delays. Their friendship developed into a deeper relationship. Late in the war, Tommy wrote to ask Carmen if she would marry him. The delay between sending that letter and receiving an answer must have been excruciating. At eighteen years of age, Carmen agreed to marry Tommy on the condition that she finish high school first. 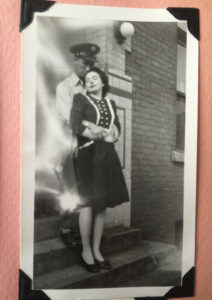 In 1945, Tommy received his discharge papers and shipped out to return to Scranton. En route, he made a stop at Spokane where Carmen was a senior in high school. It was their first in-person meeting since that time in 1942. This photo, taken at their reunion, inspired my song, “No Mail Today.” At this reunion, Carmen and Tommy confirmed their intention to marry. Shortly thereafter, Tommy left for his home in Scranton to live with his mother and six sisters; and to wait for his new fiancé to join them. Carmen finished high school and then immediately took a series of trains across the country to Scranton – an eighteen year old girl traveling solo, mostly among hundreds of boisterous troops returning from the war.

A few more photos and a grass skirt that my father sent home have survived, but all of their letters are lost. Over the years I am certain that my version of this story has developed some romantic overtones that didn’t literally take place. I wish that I had written down more of the details and asked more questions when my parents were alive. Still, at this time when powerful national and global forces conspire to discourage hope, their story gives me comfort and inspiration – especially because it does represent my parents’ truth, and the truth of many others of their generation.

Please get the vaccine as soon as you are able, take care of each other, and make lots and lots of music!

P.S. This song has benefited from the feedback of many friends – most especially from good friends and master songwriters Jud Caswell, Cosy Sheridan and Chris Lavancher. Thank you all!

The Greater Boston Food Bank “works passionately to end hunger across Eastern Massachusetts by providing our neighbors in need the healthy food and resources they need to thrive… Your support enables GBFB to distribute healthy food to neighbors in need as well as nutrition programs and resources for sustained, healthy lives and healthy communities.” The GBFB has really stepped up its support for families adversely affected by the COVID-19 pandemic – and there are a great many of them.

Please join me in supporting The Greater Boston Food Bank, or click to find a food bank in your area.