This month I unexpectedly lost a dear friend. His music friends gathered last Sunday to bid farewell and to share grief, laughter and many songs. In this issue of The Kitchen Musician, I sing the song I wrote for that occasion. 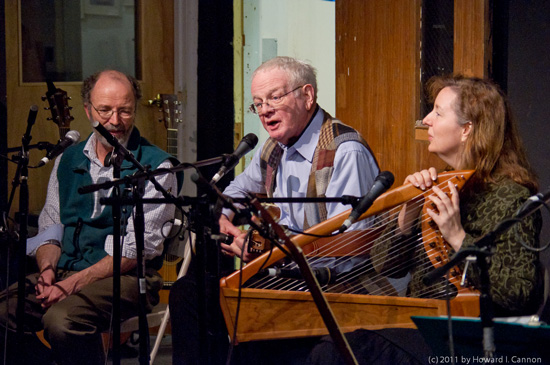 Bill Kehoe leading a song, with Tom and Kate Chadbourne
Singing with the Chanticleers at Emerson Umbrella
Photo: © 2011 Howard I. Cannon

Last month Jane Fallon asked me to join a small team of songwriters to evaluate songs for her Northeast Regional Folk Alliance song contest. Since I am a songwriter, and I have opinions on what makes a song good or bad, this should be easy… right? Well it was a lot more difficult than I anticipated. Fortunately, Jane provided us with a very clear scoring rubric. It helped, but I still struggled as I was forced to rank the songs against each criterion. So I decided to do the process several times at different times of the day and week to compare. I was struck by how my scores changed depending upon my mood, how pre-occupied with outside demands, or by fatigue. It made me see in numerical terms what I knew emotionally – that rankings of works of art are not absolute. They are temporal. For example, Neal Young’s song Ohio is about the Kent State Shootings. I can’t hear that song without responding in a visceral way. For me, that is a great song, even though it might not score well on a songwriting rubric. It was released in 1970. I was twenty-one years old and struggling with how I would respond to the draft and the Viet Nam War. When I first heard that song, it crystalized the emotional soup in which I was swimming. I instantly knew that I had to work to end the war, and if called to serve I would refuse. Every song has the potential to touch someone in that same way, depending on circumstances. The hard part is matching the song and the person who is in a situation to be moved by it. Sometimes the noise of our modern lives makes it difficult to make those connections with songs that may speak more quietly than those you hear on mass media outlets. One place to start is by listening to live local music in your community. It might surprise you if you approach it with a your own rubric, as opposed to that used by television shows like American Idol.

Video by Yonie Yee.
Lyrics shown in the comments section at the end of this page.

Recently I learned that a friend had died unexpectedly. Bill Kehoe was a great singer who frequented the open mikes in the metro-west area of Boston. We became friends because of our mutual love of old songs. My friend Kate Chadbourne brought us together when she invited me to join her loose knit collection of musicians that has come to be known as the Chanticleers. This group also includes Pat Kennealy, Robert Phillips and Linda Abrams. We were formed to do a single show of Irish music on Saint Patrick’s day, however we had so much fun that we continued to perform two or three shows each year ever since.

John Ferullo is an active supporter of local music, and he has hosted many open mikes at which Bill appeared. Bill would sing obscure folk songs, old country songs, Irish and even a few originals. From time to time he could be convinced to share a bawdy song or two (or more). I treasure a CD he recorded at John’s open mike at the Parish Center for the Arts (PCA) in Westford. Typical of Bill’s knack for words, he entitled the CD “Songs in the Best of Bad Taste”.

Last Sunday, John hosted a gathering of musical friends at the PCA to honor the memory of Bill Kehoe. It was a special evening. Folks sang songs that we learned from Bill and songs that he would request. We laughed, cried and shared a few hugs. Some of us wrote songs to try to give our sadness wings. “Farewell Good Friend” is the song I wrote for this event. The video above was taken by Yonie Yee on the following day when I sang at the Roslindale Open Mike, hosted by Neal Braverman and Mike Delaney. We are fortunate to have so many great opportunities to share music in Greater Boston and Southern New England.

Nov 17, Saturday, 1:00 pm, Hudson, MA. I will be sharing some tips for how to improve your songwriting at the Songwriters’ Round Table. This loose knit group of songwriting enthusiasts meets monthly at the Harvest Cafe, 40 Washington Street, Hudson, MA. All are welcome. If you like, bring a new song and 12 lyric sheets to share for peer review.

Nov 26, Monday, 6:00 pm, BNN-TV. I join hosts Glenn Williams and Suzanne Schultz on BNN-TV’s “It’s All About Arts” show for an hour to share music and an interview. This show will be streamed live via BNN-TV.

Nov 27, Tuesday, Newton, MA. I will be the guest lecturer/performer to discuss and demonstrate how folk music humanizes and deepens our perception of history. Hosted by Professor Lorraine Lee Hammond. Sorry, this is not open to the public.

Dec. 8, Saturday, 7:30 pm, Wachusett Music Series, Lancaster, MA. I am pumped to share this wonderful stage with my Birch Beer Records family, Dan Cloutier, Kim Jennings, Oen Kennedy and Levi Schmidt. When we got together last spring at Club Passim, we had so much fun and the music was great. This will be our first appearance at this great music series. If you are in the area, I encourage you to get some friends together and join us!

Dec 16, Sunday, 7:30 pm, Concord, MA. I will join Cheryl Perreault at the Emerson Umbrella open mike. Cheryl is the feature this evening, and she has asked a number of friends to contribute to her hour set. Happy me! 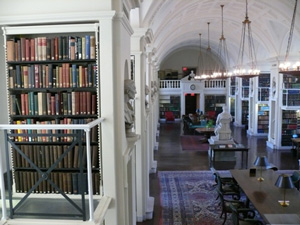 Bill Kehoe was an enthusiastic supporter of The Boston AthenÃ¦um. “The Boston Athenaeum is a membership library, museum, and venue for intellectual exchange. It was founded in 1807 and is one of this country’s oldest, continuously-operating cultural institutions. Its rich, well-documented history and its continuing place in American society and culture are made tangible by the historic building on Boston’s famed Beacon Street that it has called home since 1849, and the unique, varied collections of books, manuscripts, and art that it contains. Today, the Athenaeum remains a vibrant and active institution that serves a wide variety of members and scholars and offers exhibitions and selected programs for the enjoyment and enlightenment of all.”

Please join me in supporting The Boston Athenaeum with your tax deductible contribution.