Hello Friends,
Welcome to the November 2007 issue of The Kitchen Musician, my occasional newsletter.

Featuring “The Man Behind the Plow”, a song to praise farmers and farming.

Nov. 10, Sunday, 3:00 pm – 5:00 pm at Great Brook Farms in Bolton, MA. Relax with a sandwich, ice cream or coffee. This is not a concert venue. It will probably be a transitional audience… families and such, who stick around until their ice cream is done, then leave.

Nov. 15, Thursday, 7:00 pm – 10:00 pm at Main Streets Market & Cafe in Concord, MA. I am sharing the evening with Howie Rashba, an enthusiastic singer of songs from the Kingston Trio days. Howie and I will trade off 30 minute sets. Come for dinner and/or the bar. Reservations are accepted.

Todd Mack shared the following photo from a recent performance at Johnny D’s in Somerville, MA where I shared the stage with local and touring musicians to celebrate the life of Daniel Pearl, the Wall Street Journal writer who was slain in Iraq. Also Phil Knudsen snapped one of me performing at The Center for the Arts in Natick last month. 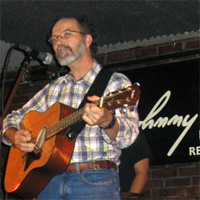 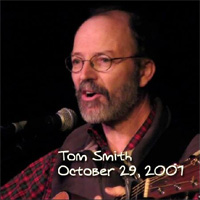 In other news, my video of “Talking Post Trauma Blues” is featured on the front page of AmericanContractorsInIraq, in support of contractors returning from Iraq with PTSD.

This Month’s Song “The Man Behind the Plow”
music © 2007 Tom Smith, original words © 1918 Ralph Gordon
A song to praise farmers and farming.

In 1975, I spent my March break from teaching immersed in the Helen Hartness Flanders collection of folk songs at Middlebury College, Vermont. Mrs. Flanders (pictured at left with one of her singers) collected folk songs throughout New England in the 1930’s and 1940’s. I was thrilled to have been granted permission to listen to the original disks, some of which included songs that existed nowhere else. Since then, I think much of this collection has been cataloged and preserved by the Library of Congress in Washington DC. Late in the week, my ears blurry from listening practically non-stop to singers recorded in kitchens, back yards and barns, I noticed a manuscript that contained the words to “The Man Behind the Plow”. Unfortunately, there was no reference to any audio recording, nor was the author or source noted. Try as I might, I could find no music in the collection, nor any where else. So I made up a melody that I thought matched the time and subject.

Recently, I discovered at Library and Archives Canada what may be the original sheet music of this song, credited to Ralph Gordon, © 1918. Although similar, it is clear that the version from the Flanders collection is the result of the “folk process”… the process by which a song changes as it is passed from songster to songster over a period of many years. I am tickled that I am now a link in that chain, as my version has been sung and recorded by other songsters who have learned it from my 1981 Gentle Wind recording. The original is very much a “parlor song” as you can hear below.

Man Behind the Plow (original)
(Click to play audio)
The orginal song, by Ralph Gordon, 1918.
Sung by Francis Macdonnell, courtesy of Library and Archives Canada

Thank you for reading my newsletter.

Wishing you peace and music,