Hello Friends,
Welcome to the October 2007 issue of The Kitchen Musician, my occasional newsletter. Contents:

Oct.10, 9:00 pm I am the feature performer at the Sit ‘n Bull Pub in Maynard, MA. This is an old fashioned pub — an enjoyable place to hear acoustic music.

Oct. 11, FODfest at Johnny D’s in Somerville, MA. is an annual concert tour honoring the life & ideals of the late Wall St. Journal reporter Daniel Pearl. (I get to do one song… oh well)

Oct. 20, 7:30 I am opening at the Union Hall Coffee House, Carlisle, MA for Ken & Julie & The Eclectic Folk Project. This should be fun. Please join us!

During the week of Sept 17, my video of Talking Post Trauma Blues occupied the #1 spot on Neil Young’s list of 290 Antiwar videos.

I have endorsed Rob Crawford for President of Red Sox Nation. After you view his wonderful song “I’m a Member of Red Sox Nation“, I am sure you will agree. Please consider voting for him before the midnight, October 2 deadline. You can vote as many as ten times per e-mail address. Go Red Sox!

I had a great time in Albany, singing at a concert to celebrate the 25th anniversary of A Gentle Wind, award winning producer of my recording for children, “Chip Off the New Block”. Click to see a poster for the concert.

This Month’s Song: I Wish I was a Mole in the Ground
Traditional, Learned from Bascom Lamar Lunsford

During the great Boston blizzard of 1978, I came down with a case of “cabin fever”. After the fifth day of looking at the world through frosted glass, my wife Margo suggested that I try to do something to keep busy. Fortunately, my little brother Snuffy (that’s right, Snuffy) had given me the Foxfire Books that previous Christmas. In Volume III, there are several designs for fretless banjos. Following the directions “exactly” (except I used an old banjo head rather than “sew groundhog or cat hide around a ring using thread cut from a squirrel hide”), and working with crude tools, a mahogany plank, a #10 bean can from the school cafeteria, and left over pieces from a yard sale banjo sacrificed for the project, I surfaced a week later with a fretless banjo. Mine is similar to the one in the book by Stanley Hicks, from Beech Mountain, North Carolina. (Shown at left in his workshop). In my “audio” version of this song (above), I also sing a little harmony and play backup guitar near the end of the song. 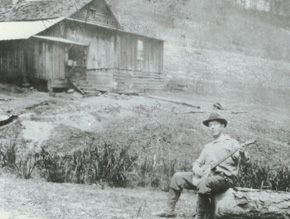 I learned “I Wish I was a Mole in the Ground” from Bascom Lamar Lunsford singing on Harry Smith’s seminal work, the “Anthology of American Folk Song“, published in 1952.

In his article “On the Trail of Bascom Lamar Lunsford“, writing about this anthology Chris King says, “One voice seized me more than the rest. Over a simply picked banjo, the voice sang mournfully about a mole in the ground. … It cracked and warbled, strained and disappeared. Nothing about it sounded trained or polished. Such voices have always affected me. Ringo was my favorite Beatle because I figured anyone who sang as sweetly as those other guys must be insincere. With a voice like Ringo’s, or this banjo man’s, there was no reason to sing unless you had something to say. This was not a voice that made birds fall from their perches, nor girls crowd the stage. But if narrative and emotion drew you to songs, this voice was unforgettable.” Amen, Mr. King