Are you someone who takes pride in “doing it yourself”? I am. Come on into the kitchen and I’ll sing a song about it. 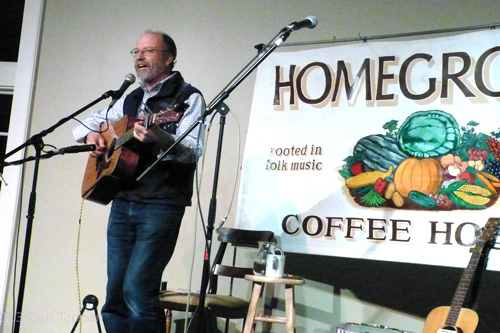 I had a great time opening for Joe Crookston last month at The Homegrown Coffeehouse. I have several great shows coming up in the fall opening for two songwriters of the superhuman class – David Mallett (October) and James Keelaghan (November). Stay tuned for details.

This Month’s Music
Do It Yourself

Do It Yourself
© 2013 Tom Smith (Lyrics in comments section below)

Earlier today I shared this song with the fifth through ninth grade students at The Park School, where I teach and do computer-related work. Fortunately, my colleagues Carole Carter and Marshall Neilson captured it on video, so I can share it with you.

When I was a boy in rural Northeastern Pennsylvania, I spent a lot of time on my own. Happily, I had a very active imagination and a strong inclination to make things. For example, as a twelve year-old I spent my entire summer income on a Heathkit HR-10 shortwave radio kit. In addition to spending all of my summer money, I also spent my entire summer spare time building it. It arrived in a box that contained several bags of wires, resistors, condensors and other electronic doodads. The instructions consisted of a few photos and a circuit diagram. In spite of several setbacks which required me to purchase parts to replace the ones I destroyed in the building process, I persisted. I was rewarded thousands of times over when I finally turned on the radio and it sprung to life. The joy and satisfaction I felt then continues to echo in my life many decades later. With this radio (and a transmitter the following summer) I made friends around the globe – friends I only knew through long hours of sending and decoding many dots and dashes of Morse code. My HAM radio station call letters were KN3ZPD. I suppose, some might describe this an early kind of Facebook for nerds.

This do-it-yourself ethic permeated my entire childhood, and grew to include self-made music – sometimes on self-made instruments. Later in adulthood, I would sometimes spend far too much time building a book shelf or other needed household accessory. Unfortunately, my frugality did not allow me to spend any money on power tools, and so my creations always had those “charming idiosyncrasies” that come from the use of inaccurate hand tools.

Somehow, I think of this month’s song as similarly reflecting the charming idiosyncrasies of hand tools, rather than those of a professional commercial-grade songwriter. In praise of the “do it yourself” ethic, I wrote it last month when my friends Dan and Faith Senie invited me to participate in their monthly songwriter series at the Harvest Cafe in Hudson, MA. Each month, three songwriters join Dan and Faith to sing in-the-round. In the third round, each singer performs an original song written especially for that evening, based upon a prompt determined by the previous month’s audience. For my session the prompt was “comfort food”. As you can tell, I deviated substantially from the topic, although some traces remain. The following week I also sang this song for my friends at the monthly Nashville Songwriters Association meeting, where Terry Kitchen and others gave me some good suggestions, some of which are incorporated in the version I sing here.

June 4, Tuesday, 7:30 pm, Natick, MA. I am supporting Bill Thibodeau as he celebrates the launch of “The Watchman”, his second book of poetry. Special guests include Cheryl Perreault, Ruthann Baler, Steve Rapson and others. This takes place at the Calderwood Pavilion in Boston, MA

My first acquaintance with Amazing Things Arts Center was in 2007 when I attended an open mike. Amazing Things was young then, and housed in an old storefront in a strip mall. But the spirit of community building through the arts was evident right away. Some of the folks I met that first evening have become very good friends and fellow music makers. Amazing Things is now housed in an old firehouse and the positive energy has accelerated. But it takes a lot more than positive energy to run a place like A.T., and public funding has all but dried up completely. So it is run by hundreds of energetic and creative volunteers, and the money it gets from sponsors and members. I invite you to join me and become a member, or consider a tax deductible donation.