Fifteen years ago I set out to thank a special high school teacher for making a positive difference in my life. I failed in that attempt, but a chance conversation two weeks ago gave me another opportunity. Come into the kitchen, I will share this story and a new song about the influence of each generation on the next. 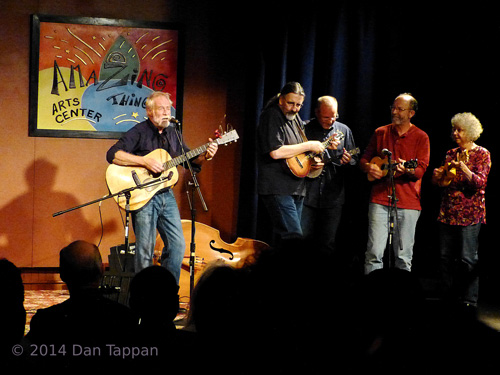 In September I had the honor to open for one of my musical heroes, David Mallett. One of the highlights of the evening was joining him on stage to accompany his “Garden Song”. Although my Aunt Carrie taught me ukulele when I was five years old, I rarely play it in public. It was a pleasure to join David’s sidekick Mike Burd, and friends Marc Bridge and Margo Lemeiux in the ensemble, captured in the above photo by Dan Tappan.

This month’s song was inspired by written correspondence with my father-in-law, C. Burgess Ayres. I loved Burge. He always enjoyed our self-made music in the kitchen. He sang along with gusto, even though he would describe himself as “pitch challenged”. In discussing his singing style, I once told him, “You seem to prefer a rude vigor to a polished banality.” With a chuckle, he agreed that this Utah Phillips quote most definitely applied to him. Late in his life his health kept him house-bound, and we would communicate via US mail. Burge never took to e-mail, or even to the typewriter. I treasure these hand-written letters, often containing philosophical jewels, original poems (which he called “doggerel”) and simple observations about the world as seen through a frosted New Hampshire window. In one of these letters, as a kind of oblique “thank you”, I told him the story that became the first three verses of this month’s song, “Grandfather’s Note” – a story especially appropriate for one who is challenged by pitch. Quite frankly, I don’t remember where I got the story. It was so long ago, perhaps I made it up myself and simply forgot. All of my web search skills have failed me, so if any readers know the source, please let me know so that I can give credit. In the final verse, I complete the metaphor – in thankful appreciation to positive role models who have stripped away all of the noise to expose the pure note that has sustained me in my life, and will hopefully sustain those with whom I share.

While writing this song, I was delighted to read that researchers excavated ancient flutes in Germany. They were made from Mammoth ivory and some from bird bone. Carbon dating has identified these flutes at over 40,000 years old, making them the oldest known musical instruments. Based upon my loose calculations, grandfather’s note has been passed through at least 2000 generations.

Fifteen years ago I visited my childhood home in Pennsylvania with the intention to look up my high school math teacher, Mrs. Farnham. I was fortunate to have been taught by Mrs. Farnham and many other great teachers who were remarkably influential in my life. I simply wanted to say “Thank you”. As a teacher myself, I knew that it would mean a lot if she heard these simple words from a former student. Unfortunately, I was told that she had died the previous year. I was devastated. Thoughts of this disappointment privately returned to me many times in the succeeding fifteen years.

Quite by accident, a few weeks ago my high school friend, Barbara, and I discussed how I had visited our old stomping grounds to visit my mother. Barbara mentioned seeing Mrs. Farnham recently. I was shocked to learn that I was misinformed fifteen years ago, and delighted to get her phone number. I quickly called Mrs. Farnham, who remembered me with expressions of great delight. We made a date to meet – a date I kept last Sunday morning. She greeted me at the door with a Calculus book, joking that before we talked, she wanted me to help out with the problem set on page 125. After a warm hug, we spent the next two hours catching up on the major events of our lives over the last forty five years. And yes, I finally fulfilled my quest to say “Thank you” in person. 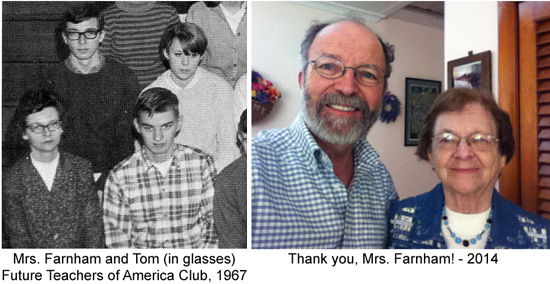 If you want to feel good, say “thank you” to someone who deserves it!

Friday, October 17, 2014, 7:30pm: Angelica, NY
Looking to my first visit to The Black Eyed Susan, a great little western New York state cafe. The Angerlica folks don’t really know me (yet) so if you have friends in the area, please help spread the word!

Saturday, October 18, 2014, 8:00pm: Rochester, NY
Returning to the Tango Cafe in Rochester, NY for Brian Coughlin’s Songwriters on the Round series. Joining us is the great duo Steve Gretz and Leslie Lee. We shared a lot of great music last year. Road trip anyone?

Sunday, October 19, 2014, 7:00pm: Rochester, NY
Returning to Greece Baptist Church in Rochester, NY to share some music at The Old Time Music Night, hosted by Leslie Lee and Steve Gretz. Free and open to the public.

“Camp Sunshine provides respite, support, joy, and hope to children with life-threatening illnesses and their immediate families from around the world through the various stages of their journeys. The year-round program is free of charge to all families, and includes 24-hour onsite medical and psychosocial support. Camp Sunshine also provides bereavement sessions for families who have lost a child to supported illnesses.”

One of my friends has a child who was diagnosed with cancer. Blessedly, her surgery and subsequent treatment are a complete success. Part of the success was the care she and her entire family received from Camp Sunshine. Their “focus is on alleviating the strain that a life threatening illness takes not only on the sick child but also on other family members. Families have an opportunity to rebuild their relationships together and meet other families facing similar challenges.” Please join me and donate to Camp Sunshine.