Last month, the New England music community lost a good friend and guiding light. Please join me in my kitchen. I’d like to share some memories and a song I performed at recent celebration for the life of Jake Kensinger. 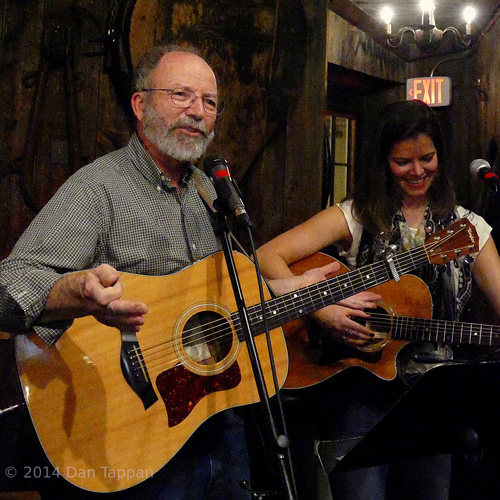 Last month I had the great pleasure to share the stage with Mally Smith, at the historic Colonial Inn, in Concord, MA. The above photo is from that evening. There were so many great singers, both on stage and in the audience.

I just received word that my good friend Chris Pahud and I will share a show at the Homegrown Coffeehouse in Needham MA on Saturday, February 21st. Chris has the most beautiful baritone voice which he ably combines with tasteful guitar playing and a barrel full of memorable songs. We will also be joined by special guests. Please save the date for an evening of wonderful music at one of the areas great venues. “Rooted in folk music — powered by carrot cake”, the Homegrown Coffeehouse is proud to be celebrating its 30th anniversary. They have hosted many of the very best touring folk musicians, so it is an honor to be added to their calendar.

Several other great shows coming up. Check out the list farther down this page.

This Month’s Music
Conversation with Jake

© 2014 Tom Smith. Performed at the Parish Center for the Arts.
Find the lyrics in the comments section below.

Events in the world coupled with those in my personal life have brought me to the conclusion that the greatest hope for survival of our weary humankind can be found in simple gestures of grace, empathy and kindness. We are currently in a cyclone of counter examples. We read, see and hear it in the news every day. But recently I have been blessed to be both witness to and the recipient of so many acts of simple kindness and examples of grace that my heart is full of hope in spite of the many reasons to abandon it. 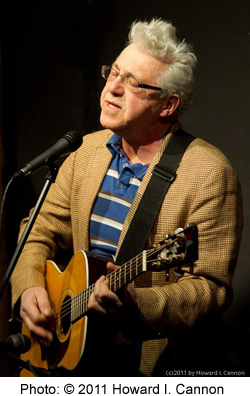 I direct you to the life of Jake Kensinger as one prominent example. For decades, Jake has been a pillar of the New England music community. Jake was a very talented musician. I loved the way he would pick the most important notes on his guitar, and leave space in the music where the notes were not necessary. Coupled with his rich and resonant voice he made many classic Americana songs his very own. I will never hear a Johnny Cash song again without thinking about Jake’s rendition of Folsom Prison or Ring of Fire. There was something about his playing and singing that communicated to me that the world would be okay, regardless of my difficult work day, personal trials, terrible events on the world stage. This was especially true when he performed with Ellen Schmidt, his musical partner of twenty six years, as the duo Two for the Show. According to my estimation, Jake and Ellen hosted thousands of open mic’s over the years and performed in venues as diverse as the Kerrville Folk Festival, Club Passim, libraries, schools, nursing homes and (my favorite) Crosby’s Market – as Jake would say “next to the hanging meats”.

But even more than his great musicianship, I remember how Jake would encourage others, especially those who were stepping out of their comfort zone. First-time open mic participants, people who had been given the message by others that they were not good enough to perform music for others, would find the courage to return based upon a few simple words from Jake as he helped them get comfortable on stage. He was the first and loudest to applaud.

Jake was also not afraid to say what was on his mind. He did not suffer arrogance or rude behavior quietly, usually by a sideways comment under his breath for the benefit of the few people within close earshot of his often humorous remarks. He preferred an authentic performance to one designed to impress others.

He was famous for his (often self-deprecating) jokes, delivered in stride during commentary between songs. No matter how many times he repeated them, they were received with great appreciation, like the return of a friend. I have lost track of the number of times I heard him extol his audience to sing along by remarking “the louder you sing, the better we sound.”

Jake’s greatest trial was dealing with ALS, also known as Lou Gehrig’s disease. I will always remember the grace with which he dealt with the gradual loss of body functions. When he could no longer play guitar, he played the ukulele. When he couldn’t play the uke, he accompanied himself with tambourine. The last time I saw Jake was at Main Streets Market in Concord, MA performing with Ellen Schmidt and harmonica virtuoso Hatrack Gallagher. Jake’s talented friend Steve Sadler had recorded all of Jake’s guitar parts onto his iPad so that Jake could “virtually play guitar” over the sound system and sing all of his familiar songs. In spite of it all, Jake always sang with gusto, never falling into self-pity. He knew that he had a short while left to do what he loved most, share music with others. After a particularly inspired performance of “Baby It’s Cold Outside” with Ellen, I told him “you were on fire tonight”. He responded, “Well I don’t get too many chances to combust these days.” I loved being Jake’s straight man. Those of us who were in Jake’s presence enjoyed every moment – our lives forever improved.

I will leave you with two videos to give you a flavor of Jake. The first is a tribute created by Wayne Martin, and the second is a spirited 2012 performance at The Main Street Cafe in Groton, MA.

There is an angel on my guitar strings. Thank you, Jake.

Sunday, December 14, 2014, 8:00pm: Westford, MA
I will do a 30 minute feature set at this long-standing open mike at the Parish Center for the Arts, hosted by the wonderful John Ferullo. Arrive by 6:30 to sign up to sing a song or share a poem. Great space, great people.

Friday, December 19, 2014, 8:00pm: Dedham, MA. CANCELLED
CANCELLED. My appearance at the New England to Nashville showcase is cancelled due to family obligations, but please do drop by the Paradise Cafe to support this wonderful collection of songwriters. Lots of talented folks to take my place.

Wednesday, December 31, 2014, 10:00pm: Needham, MA
Here we go again! So pleased to return to the Homegrown Coffeehouse for our annual New Year’s Eve program, in the round with Chris Pahud, Cheryl Perreault and Steve Rapson (collectively known as “The Rounders”). Arrive early for the opening set by the talented duo, Abbey & Jaclyn Perreault.

Saturday, February 21, 2015, Needham, MA
SAVE THE DATE. I am thrilled to co-headline with Chris Pahud at the Homegrown Coffeehouse, proudly celebrating their 30th anniversary of bringing the very best of local and touring folk artists. The carrot cake alone is worth the price of admission! Stay tuned for more details, including special guests.

The ALS Association “leads the way in research, care services, public education, and public policy — giving help and hope to those facing the disease. The Association’s nationwide network of chapters provides comprehensive patient services and support to the ALS community. The mission of The ALS Association is to lead the fight to treat and cure ALS through global research and nationwide advocacy, while also empowering people with Lou Gehrig’s Disease and their families to live fuller lives by providing them with compassionate care and support.”

Please join me in supporting the work of The ALS Association.