We in New England are beginning to thaw out from the snowiest February on record. This is my inspiration for a new song to welcome the Herald of Mistress Spring! Please join me in my kitchen. I like honey with my tea, how about you? 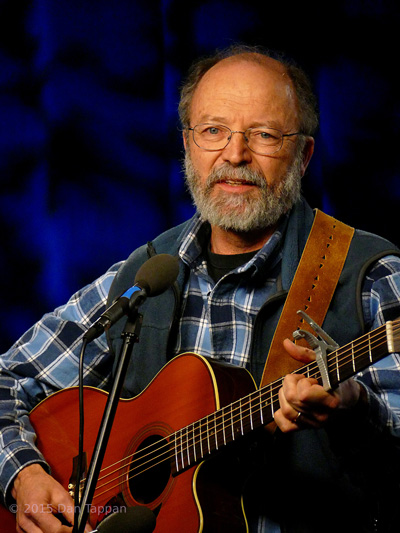 Enjoying a show at HCAM-TV for Cheryl Perreault’s Wake Up and Smell the Poetry.
Photo © 2015 Dan Tappan.

The snow and ice forced Chris Pahud and me to reschedule our highly anticipated split billing at the Homegrown Coffeehouse in February – happily rescheduled for Saturday, May 9th. The supremely talented Seth Connelly has agreed to lend his instrumental magic. I hope you will join us.

I can’t wait for this Friday, March 13th when I open the 2015 season for Cherry Bridge Concerts in Bridgewater, MA. (see “Upcoming Shows” below for a list of all shows.)

And then I head for Florida to spend a glorious week in the sun with Margo and extended family. Hurray!

Many thanks to the good singers at Rich Eilbert‘s Lincoln Open Mike Acoustic in Lincoln, MA. We recorded this song last night at the open mike, with no preview of the melody. They jumped right in on the chorus!

It is March 10th and still we have several feet of snow outside of our house. This winter the Boston airport received over 104 inches of snow so far – most of which came in February! Click here to see a video I made on February 15th to show family in other parts of the world what this this is like. Nearly everyone here has a sore back from shoveling non-stop for the last month and a half. Many live shows were canceled, and cabin fever is rampant among my family, friends and colleagues at work.

I confess, I slid into sadness this winter. My dear mother, the most influential person in my life, died on Thanksgiving weekend. Some folks around her town still call me “Carmen’s boy”, a title of affection which I don’t refute, even though I get the senior citizen discount at the local movie theater.

In my sorrow, music has helped me get through, but I have been unable to write until last week when signs of spring started to emerge – the trickle from melting icicles, daylight gradually increasing, the appearance of seed catalogs in the mail, and for me the most joyful and welcome are the return of migratory birds. I saw a flock of seven robins outside the classroom in which I teach. Friends have sent photos of bluebirds that have stopped by their bird feeders. My mother was constantly amazed at the changing of the seasons. She was particularly fond of spring. In a way, this month’s song was written for her.

Among our favorite old-fashioned family books are those of Thorton W. Burgess in which Grandfather Frog tells tales of Old Mother West Wind and the forest creatures. These early signs of spring brought to mind the story of When Mr. Bluebird Won His Beautiful Coat. In this story, Winsome Bluebird volunteers to fly the dangerous late winter journey north to declare the coming of Mistress Spring.

“As he passed on he left behind him great joy, and Mistress Spring found as she journeyed north that all in the forests and on the meadows were eagerly awaiting her, for they had heard the message of her coming; and she was glad and told Old Mother Nature how well her herald had done his work. […] Then she said: ‘Winsome Bluebird, for that is to be your name from now on, I here and now appoint you the herald of Mistress Spring, and the honor shall descend to your children and your children’s children forever and ever, and you shall be one of the most loved of all the birds. And because you are a herald, you shall have a bright coat, as all heralds should have; and because you are true and faithful, your coat shall be blue, as blue as the blue of the sky.’” – Thornton W. Burgess, Published by Little, Brown & Co. 1917

Here is a short clip of the Eastern Bluebird’s song. The English translation of course is “Here Comes the Sun!”.

May God bless the bluebirds.

Sunday, April 12, 2015, Somerville, MA
I am very happy to return to Tom Bianchi’s Songwriters series at The Burren in Davis Square, Somerville, MA. I will be joined by Jeffrey Pepper Rogers and TBD.

Saturday & Sunday, April 25-26, 2015, Mansfield, MA
I return to the New England Folk Festival with two shows – one shared with Peter Fishman and Deb O’Hanlon, and the other is a Pete Seeger tribute hosted by the Folk Song Society of Greater Boston.

Saturday, May 9, 2015, Needham, MA
This is the rescheduled March show with Chris Pahud and Seth Connelly. The Homegrown Coffeehouse is a great room, celebrating their 35th years of presenting the very best of national and local folk music.

About Ample Harvest
Click the image above to play the video.

Please join me in supporting the work of Ample Harvest.