I think that the best gig anyone can have is to be a grandparent. I spent a week in March with our grandkids in sunny Florida. This month, I share a little calypso-flavored song that emerged out of that special time away from wintery New England. I’ll meet you in the kitchen! 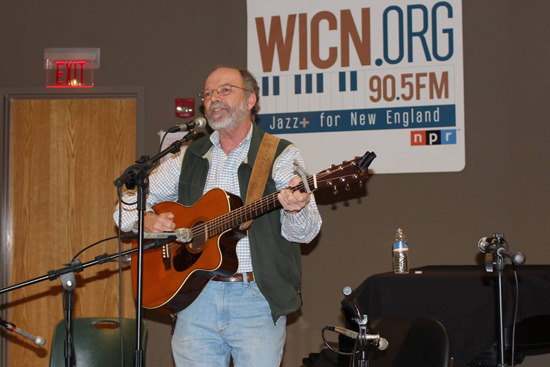 The snow and ice forced Chris Pahud and me to postpone our highly anticipated show at the Homegrown Coffeehouse in February – happily rescheduled for Saturday, May 9th. Supremely talented multi-instrumentalist, Seth Connelly will join us on stage. We also have another very special mystery guest. I hope you will join us for what promises to be a wonderful evening of music. See below for details or buy tickets now.

Is it spring yet?

La De Dah – © 2015 Tom Smith, Lyrics in comments below
Special thanks to Neal Braverman, Steve Friedman and the good folks of the Roslindale Open Mike.

Sometimes I have no control over the songs I write. I took my daughter’s old guitar with me on vacation in sunny Florida last month. One of my goals for the week was was to write a new song – one that I could sing at the songwriter circles that are on my schedule this month – a song that would bring praise and admiration from all of my talented songwriter friends. I wanted to write a song that would express the melancholy I was experiencing – a melancholy that was amplified by an extended winter. I wanted a song rich in metaphor and with deep meaning – a song that would move strong men to tears. Instead, I ended up with a song called “La De Dah”.

Margo and I rented a house on Anna Maria Island, which we shared with our daughter, son-in-law and our two grandchildren. What a great time we had, laughing, playing board games, cooking, building sand castles, walking, and we even slept late a few days. My melancholy quickly dissolved like the tide-washed sand castles we made on the beach, and this song is the result. Margo tells me that it has an “ear worm effect”. An ear worm is a song which attaches itself to you, whether you like it or not. You can hear it in your head at odd times like when you wake up to go to the bathroom in the middle of the night. An ear worm is not exactly a welcome visitor, so if this song has that effect on you, please accept my apology – but as I said earlier, I didn’t really have any control over the song I wrote this month. Blame it on these two kids shown below (recorded last summer in Jaffrey, NH.)

The Keeper of the Eddystone Light – traditional

Thank goodness for the children.

Sunday, April 12, 2015, Somerville, MA
I am very happy to return to Tom Bianchi’s Songwriters series at The Burren in Davis Square, Somerville, MA. I will be joining Jeffrey Pepper Rogers and Cathy Schumer.

Friday, April 17, 2015, Dedham, MA
I join a gaggle of great songwriters at The Paradise Cafe at the New England to Nashville songwriter showcase. We’ll do several groups in the round of non-stop acoustic goodness.

Saturday & Sunday, April 25-26, 2015, Mansfield, MA
I return to the New England Folk Festival with two shows – one shared with Peter Fishman and Deb O’Hanlon, and the other is a Pete Seeger tribute hosted by the Folk Song Society of Greater Boston.

Saturday, May 9, 2015, Needham, MA
This is the rescheduled March show with Chris Pahud and Seth Connelly. The Homegrown Coffeehouse is a great room, celebrating their 35th years of presenting the very best of national and local folk music.

“If a soprano ukulele is placed in the hands of a hospitalized child, a miracle begins to occur. Pain will subside. A smile will appear on a child’s face. The fingers will touch a beautiful instrument of smooth and polished wood. They will feel and hear the soft vibrations of 4 nylon strings. A certified music therapist will teach them how to play a song. They will anxiously look forward to another lesson. While watching, the parents will momentarily be transformed to a joyful place. And when each child leaves the hospital, they will be given their ukulele to take home as a gift of music for life. Music heals. This is a fact. This is medicine.”

Please join me in supporting the work of Ukulele Kids Club.

About Ukulele Kids Club
Click the image above to play the video.