This month is the eighth anniversary of The Kitchen Musician. I started this monthly blog as a way to encourage me to write and perform music. It has succeeded beyond my hopes, and connected me with many new friends. Thank you wonderful readers and folk enthusiasts! This month is also the 96th anniversary of Pete Seeger’s birth. We’ll celebrate with a song he wrote in the 1960’s – and a little bonus video to welcome in the May-O! Come in. I’m in the kitchen. 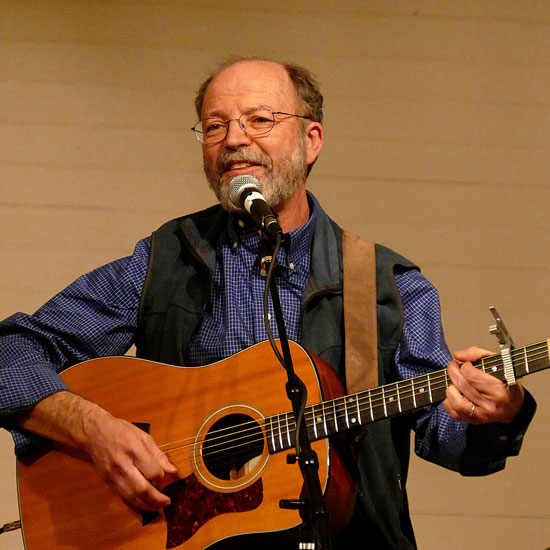 Tom at Parish Center for the Arts.
Photo: © Dan Tappan

I am honored to be a finalist in the 2015 Rose Garden Performing Songwriter Competition. This will take place on May 16th at The Rose Garden Coffeehouse in Mansfield, MA. Headliner that evening is the marvelous Catie Curtis.

My biggest show of the season was snowed out last March, but happily rescheduled for May 9th at the Homegrown Coffeehouse in Needham, MA. Please consider adding us to your live music options.

This Month’s Music
Quite Early Morning

Special thanks to The New England Folk Festival,
The Folk Song Society of Greater Boston for sponsoring this event,
and to Tony Saletan, Lori Fassman and Lorraine Hammond for joining me.

On Saturday I had the good fortune to share the stage at the New England Folk Festival with three great singers in a tribute to Pete Seeger. Tony Saletan “is an American folk singer and educator, who is responsible for the modern rediscovery of two of the genre’s best-known songs, Michael Row the Boat Ashore and Kumbaya.” – Wikipedia. He has been a musical inspiration of mine for decades. Ever since I met Lorraine Hammond in a dulcimer making workshop in 1973 I have admired her musicianship on multiple folk instruments and her treasure trove of great folk and original songs. She too is a folk musician of international calibre. Lori Fassman and I have become good friends via our mutual love of group singing and activities in the Folk Song Society of Greater Boston. Though she has a beautiful and true solo voice, Lori appears to get her greatest enjoyment from singing with others.

If I had to identify one person who influenced my music most it would have to be Pete Seeger. There are many others of course, but Pete has inspired me over the length of my entire life. You can read a longer post I wrote on this subject in the March 2014 issue of The Kitchen Musician shortly after he died.

May 3rd is the 96th anniversary of Pete’s birth. How fitting that it is so close to our annual Earth Day celebration. Pete has been a steady voice of encouragement to take care of our fragile planet. In many ways, Pete was way ahead of the rest of us. His prophetic song Quite Early Morning encouraging us to “heed these early warnings” was composed way back in the 1960’s.

To me, nothing embodies the hope of a healing planet more than children and the entry of spring – bringing with it so many signs of rebirth. This year it is especially welcome following a winter of record snowfall and cold. I asked my grandchildren Anna (7) and Andrew (4) to help me share our enthusiasm. This is a fragment of a traditional song that I first heard from The Watersons, an English family with a rich singing tradition. You can hear them sing it and read a discussion about the song on Mainly Norfolk. The name of the song is Hal-an-Tow, the meaning of which appears to be disputed. This title was put through the folk process in a way that made more sense to us. I also mis-remembered other lyrics and simply boiled it down to singing only the chorus, but it works for us.

Summer is a-comin’ and the winter’s gone away-O!

Saturday, May 2, 2015, Dedham, MA
Join me at 2:00 pm for a family show at The Blue Bunny, one of my favorite independent childrens’ book stores.

Saturday, May 9, 2015, Needham, MA
This is the rescheduled March show with Chris Pahud and Seth Connelly. The Homegrown Coffeehouse is a great room, celebrating 32 years of presenting the very best of national and local folk music.

Saturday, May 16, 2015, Mansfield, MA
Performing in the finals of the Rose Garden Coffeehouse Performing Songwriter Competition. The wonderful Catie Curtis is the headliner this evening.

Saturday, May 23, 2015, Mansfield, MA
Joining Lloyd Thayer, Bill Scorzari and Greg Cornell in the round at Club Passim Campfire Festival. Lot’s of great music over the entire Memorial Day weekend, Friday through Monday. Best value in folk and acoustic music in New England.

“If a soprano ukulele is placed in the hands of a hospitalized child, a miracle begins to occur. Pain will subside. A smile will appear on a child’s face. The fingers will touch a beautiful instrument of smooth and polished wood. They will feel and hear the soft vibrations of 4 nylon strings. A certified music therapist will teach them how to play a song. They will anxiously look forward to another lesson. While watching, the parents will momentarily be transformed to a joyful place. And when each child leaves the hospital, they will be given their ukulele to take home as a gift of music for life. Music heals. This is a fact. This is medicine.”

Please join me in supporting the work of Ukulele Kids Club.

About Ukulele Kids Club
Click the image above to play the video.