Welcome to the September 2008 issue of The Kitchen Musician, my monthly folk music newsletter, featuring Join Me Give Obama Your Vote, a song I wrote to encourage others to support the Barack Obama presidential campaign. 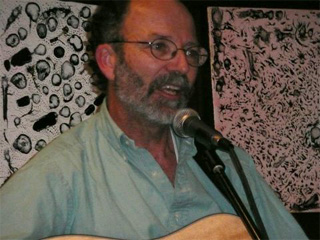 My non-musical life has been extremely busy since June. I missed last month’s newsletter, but it was very nice that several of you actually noticed and sent your encouragement in e-mails. Thanks! I am happy to be back in the groove this month.

My fall and winter musical calendar is a bit sparce, though I am excited about the events that are scheduled. December will find me sharing the stage with John Schindler, a wonderful singer and songwriter whom I admire. I will be going to Pennsylvania to perform some mining songs at the 50th anniversary of the Knox Mine Disaster. And in the Spring, my daughter Mally and I will be doing a rare duo appearance as we open for the remarkable Edie Carey.

If you are aware of a good listening venue, drop me an e-mail. I am seeking bookings for the fall and beyond.

In some past elections, I understood what U. Utah Phillips meant when he said, “If God meant us to vote, He would have given us candidates.” This November, however we have a clear and urgent choice.

I am excited at the potential I see for Barack Obama to heal our nation at home, and to rebuild positive relationships abroad. As positive as I feel about the Obama-Biden ticket, it was John McCain’s choice of Sarah Palin as his running mate that inspired me to write this campaign song. It is with a distinct sense of urgency that I recorded it.

A life long Democrat, I have been moved by several thoughtful Republican friends who have told me they are very concerned about changing the political and economic direction of our country. They tell me that McCain and Palin are not the best standard bearers for the task. It is from their perspective I wrote this song. It is not my intention to be disrespectful of those who have faithfully served our country in Iraq and elsewhere.

The traditional tune is “Rosin The Beau”, a very singable song with a long history. It is interesting to note that this tune was used for “Lincoln and Liberty Too”, the campaign song of a great Republican who served our country well in another important time of change.

I encourage you to join me to work for a successful Obama campaign. Please pass along this song to others (especially if they lean towards the Republican ticket), and encourage them to support Obama this November.

Oct. 12, Sunday: I am the feature performer at the Parish Center for the Arts in Westford, MA. Music starts at 7:30 pm and my 30 minute set starts around 9:00 pm. Hosted by John Ferullo. $5 admission. Click for details.