Welcome to the July 2008 issue of The Kitchen Musician, my monthly folk music newsletter, featuring Swallowed by the Hole, a song I wrote in honor of the upcoming 50th anniversary of the Knox Mine Disaster which took place near my home in 1959. 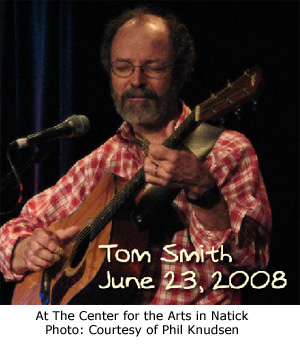 I recently learned that Country Joe McDonald included my “Talking Post-Trauma Blues” on his Veteran’s Links. Perhaps you recall Country Joe as the leader of the famous “Give me an F!” cheer at Woodstock in 1969. I was tickled that he sent me an e-mail requesting the lyrics to my song. (How about a gig at one of your shows, Joe? -wink- )

My daughter Mally and I have been booked to open a show by Edie Carey in the new year. Edie is a remarkable talent. It is a great opportunity for Mally and me to make a rare duo appearance.

My friend Dan Cloutier hosts an open mike at the Amazing Things Arts Center in Framingham, MA. Dan is a terrific singer and songwriter, and his guitar accompaniment is “spot on”. I recommend his shows. Last month he challenged the musicians at his open mike to write disaster songs. “Swallowed by the Hole” is my answer to his friendly challenge. Thanks Dan!

If you are a regular reader of The Kitchen Musician, you will notice that this month my video recording “studio” has moved from the busy kitchen to the opposite side of the house. Perhaps a future newsletter will give you a peak at my growing household.

On January 22, 1959 the Susquehanna River broke through the Knox Coal Mine in Port Griffith, Pennsylvania, near Pittston. I was nine years old and living about twenty five miles from the scene of this accident. The memories and emotions of that time came back to me as I read Voices of the Knox Mine Disaster, and The Knox Mine Disaster, both by Robert Wolensky, Kenneth Wolensky and Nicole Wolensky. This song is primarily based upon the facts and interviews in these books.

UPDATE: Here is this song as heard on my 2011 CD “Journey Home”
I performed this song at the 50th anniversary of disaster in January 2009. 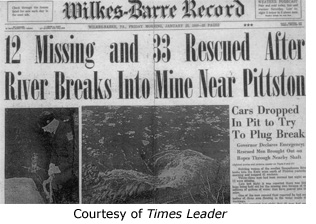 In spite of warnings that mine operators were digging dangerously close to the Susquehanna River, they continued to remove coal from the River Slope, a tunnel that extended under the river. There were reports that some miners refused to work in the River Slope because it was so wet from the “black rain” seeping from the ceiling.

Miners used a technique called the “room-and-pillar” method, in which they would remove coal in an area, leaving some coal to act as pillars. These coal pillars supported the tunnel ceiling. When all of the coal was removed from an area, miners would remove the coal pillars, a process known as “robbing the pillars”. This of course left the area dangerously unsupported.

On January 22, 1959, eighty one miners reported for the first shift. At about 11:30 a.m., the roof gave way in the River Slope, and according to foreman Jack Williams (who survived the event) “It sounded like thunder. Water poured down like Niagra Falls.” Mine superintendant Robert Groves received word of the break and called down to all miners to get out. Fearing panic, he withheld the reason for the evacuation which may have caused some miners to take their time, possibly sealing their fate. 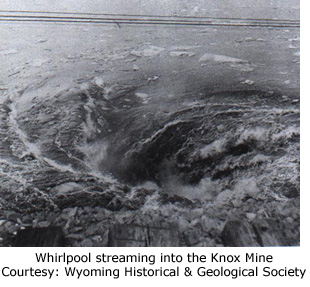 At the surface, horrified observers saw a huge whirlpool in the Susquehanna, which at its peak, streamed 2.7 million gallons of water per minute into the mine. Water filled the River Slope tunnel and the adjoining mines. In an effort to plug the hole and stop the flow of water into the mine, desperate mine employees rolled hundreds of railroad gondolas and coal cars into the whirlpool, along with many dump trucks of dirt and bolders.

Down below, some miners made it to the elevator, or “cage” and were pulled up to safety. Many others attempted to go out through the tunnels, but the river rushed in, blocking all exits and carrying with it huge blocks of river ice and timber props, the wooden pillars that supported the ceiling. Joe Stella, a mine surveyor, was one of these men. Without his map, and knowledge of the long abandoned Eagle Air Shaft, thirty three miners would have surely perished. When it was all over, twelve men lost their lives but remarkably sixty-nine made it to safety. 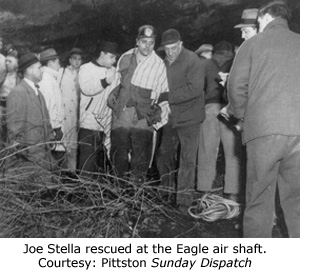 In 1959, anthracite mining in northeastern Pennsylvania was in its decline. However, the events of January 22 sealed the fate of anthracite mining with an exclamation point. Because the river filled many adjoining mines, the industry never recovered. Thousands of mining jobs were lost and the economy of the entire region was decimated.

I was nine years old at the time of the Knox Mine Disaster. Shortly after the event, my father was laid off as a truck driver. He and many of my relatives and neighbors lost their jobs.

The mines were eventually drained of most of the water that entered that day. Unfortunately, the raging water flushed out many of the props that supported the ceiling, and with no water to provide pressure in the tunnels, they collapsed. This caused huge sink holes at the surface.

My father was called back to work to help move the houses that could be saved, but the mines swallowed entire city blocks. Northeastern Pennsylvania was known as a “depressed area”, both figuratively and literally. With collapsed mines, huge burning culm dumps (piles of waste coal that caught fire by spontaneous combustion) and burning underground coal seams that seeped acrid smoke to the surface, the area where I grew up provided a sad backdrop to my teenage years. We all lived with the understanding that it wasn’t just those twelve unfortunate miners who were swallowed by that hole in the Susquehanna.

In my song I use the phrase “dead work”, exploratory work or investigative mining in which earth and rocks are removed, but little or no coal. The irony of the phrase was too hard to keep from adding to the song.

Thank you for reading my newsletter. Please feel free to comment online, and say “hello” if you come to one of my shows.

July 15, Tuesday, 8:30 pm. I am featuring at the Twice Told Tales open mike at the Harvey Wheeler Community Center in West Concord, MA. Hosted by John Ferullo and Betsi Mandrioli.

July 20, Sunday, 10:00 a.m. I am performing a number of songs as part of the lay service at the First Parish Unitarian of Sudbury.

Sept. 6, Saturday, 8:00 pm. Opening for Bill Staines. I am a long-time admirer of Bill’s music. It is an honor to share the stage at the Amazing Things Arts Center.