Welcome to the June 2008 issue of The Kitchen Musician, my monthly folk music newsletter featuring “The Eensie-Weensie Spider” — an allegory of hope and encouragement. 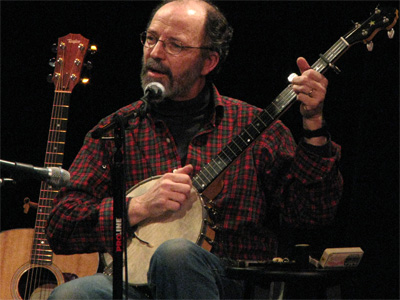 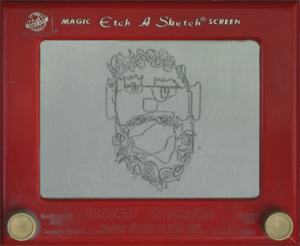 Etch-a-Sketch Portrait: by Heather Smith
Thanks for the full head of hair, Heather.

Following a musically active spring, my summer show schedule is very light. Lots of “real life” things happening. If you know of a venue that would be compatible with my music, or if you can suggest a house concert host, please send the information along to my booking agent.

July 1, Tuesday, 7:00 pm. I will be performing a mini-set (about 15 minutes) at the Sweet Bites Cafe in West Concord, MA. Click for details.

July 15, Tuesday, 8:30 pm. I am featuring at the Twice Told Tales open mike at the Harvey Wheeler Community Center in West Concord, MA. Hosted by John Ferullo and Betsi Mandrioli. Click for details.

Sept. 6, Saturday, 8:00 pm. Opening for Bill Staines. I am a long-time admirer of Bill’s music. It is an honor to share the stage at the Amazing Things Arts Center. Click for details.

Last week I had the pleasure of participating in Wake Up and Smell the Poetry, a wonderful local cable television program hosted by Cheryl Perreault. This will be televised next month via Hopkinton Community Access TV.

This Month’s Song: The Eensie-Weensie Spider

As many of you know, I usually record music for The Kitchen Musician in, well… my kitchen. This month I have a song that requires a live audience so I took my video camera to several local open mikes. Thanks to all of my friends who sang along with gusto. The performance you see here is from the Parish Center for the Arts in Westford, MA. This particular evening was a sultry 95 degrees, so you can hear the large fans, and the street sounds through the open front door of this large church hall. Our host was the talented and supportive, John Ferullo. John is a wonderful singer and songwriter, with a relaxed and engaging presentation style. This evening, John also displayed his talent on the sound board.

In 1994 or 1995, my friend Bob Blue and I discussed inspirational songs at the Children’s Music Network conference. We were both fans of “The Mary Ellen Carter”, the great Stan Rogers song about a ship that sank and the heroic efforts of the crew to raise it against all odds. The chorus is a rousing “Rise Again, Rise Again”!

Here is a wonderful clip from the film One Warm Line, in which Robert Cusick, the Chief Mate of the capsized ship “Marine Electric” describes how “The Mary Ellen Carter” helped him when he thought all was lost. Following Mr. Cusick’s story is Stan Rogers himself singing his wonderful song.

And below is a YouTube video of Amy singing the traditional “Eensie-Weensie Spider” song. A joyful rendition.

Bob Blue was an amazing person. A talented teacher and musician, he was loved by many well beyond the Children’s Music Network, which he co-founded. He had Multiple Sclerosis, a condition in which the immune system attacks the central nervous system, but one rarely left a conversation with Bob thinking that he “suffered” from the disease. Of course, living with MS is very difficult, and Bob’s life with MS was no different. However, his incurable optimism and joy for life was what I took away from every interaction with him, even when he was in the final stages prior to his death in March of 2006.

I was interested in how music encouraged Bob to keep his spirits up. Being one to see connections that were invisible to the rest of us, Bob commented how one could sing the traditional children’s song, “The Eensie-Weensie Spider” to the tuned of “The Mary Ellen Carter”. We shared a laugh, and eventually went home after the conference.

After returning home, I e-mailed Bob a verse and chorus that combined these two songs. I didn’t think too much about this at the time. Bob and I frequently communicated about songs and teaching. Months later, Bob called me on the phone and said “our song” was published in Sing Out! Magazine, and also Sassafras, the publication of The People’s Music Network. I had nearly forgotten that I had written Bob about our “Eensie-Weensie Spider” conversation. He had reworked the verse I offered, added two more verses, and used my chorus. He told me it was a bit of a hit in the folk underground, and he was kind enough to include me as co-author.

Last month, I was asked to perform at a benefit to raise money for a friend who is experiencing serious medical and financial problems. “The Eensie-Weensie Spider” immediately came to mind as a song that combines all of the best tools for dealing with difficult life challenges – hope, encouragement, and humor.

Wishing you hope, encouragement and humor,

You can learn more about Bob Blue and purchase his recordings, video, and writings at BobBlue.org.

Newsletter May 2008 – The Kitchen Musician