This month I officially launch the presidential election season with an old fashioned “talking blues”, like those made famous by Woody Guthrie and Bob Dylan. Caution, this may not be suitable to view at work, unless of course you work for the Democratic National Committee. 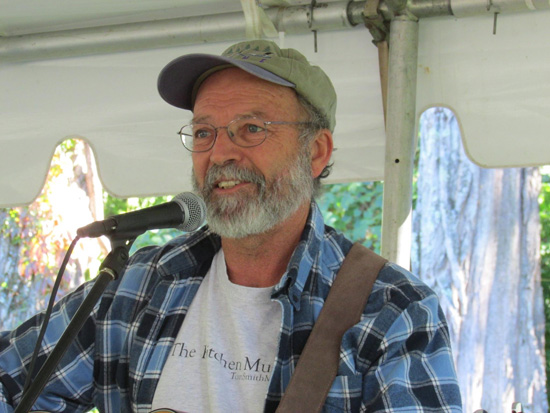 Looking ahead to December, I am pumped to spend an hour in the studio with Dave Palmater in front of a live studio audience to record a Studio Session Live show for later broadcast.

I also succumbed to a common malady among singer-songwriters. I bought another guitar. You can see it in this month’s video. Sometimes I wonder why Margo puts up with me. I suppose it could be worse.

One of the good things about not relying on music for my livelihood is that I am free to write and perform without considering if my songs would adversely affect my career. This month, however I confess that I am a little worried that I may lose some of my more conservative friends after they hear my comments on the upcoming presidential election.

My song uses an old folk song form known as the talking blues, even though it isn’t really a blues. The first known recording of a talking blues was by Christopher Allen Bouchillon in 1926. The form increased in popularity in the 1940’s when Woody Guthrie used it very effectively for numerous songs, including Talking Dust Bowl Blues. Famously, Bob Dylan brought the talking blues to a mass audience in the 1960’s with songs like Talking John Birch Society Blues. By this time the genre was commonly used as a means for political or topical commentary. I too have used the form in an early Kitchen Musician issue when I introduced the Talking Post-Trauma Blues, which currently has over 59,000 views on Youtube!

If you disagree with my Talking Presidential Election Blues, I suggest that you write your response in the form of a song. Please include a link to it in the comments section below. I promise I will listen carefully.

Please vote! … and take a friend or neighbor with you!

Sunday, December 6, 2015 at 5:00 pm, Manomet, MA
I have the honor to be included in Bob Crownfield’s Studio Session Live series, hosted by Dave Palmater. We record in front of a live studio audience for later broadcast. Stay tuned for shedule and stations.

Friday, December 18, 2015 at 7:00 pm, Dedham, MA
Joining a gaggle of singer/songwriters at the New England to Nashville artist showcase at the Dedham Square Coffeehouse (formerly known as Paradise Café). Groups of three or four in-the-round, all night long!

Thursday, December 31, 2015 at 10:00 pm, Needham, MA
I am pleased to return to the Homegrown Coffeehouse for our annual New Year’s Eve program, in the round with Chris Pahud, Cheryl Perreault and Steve Rapson (collectively known as “The Rounders”.)

“OurTime.org is one of the nation’s largest non-profit organizations committed to increasing the voter participation of young Americans. Since our launch in 2011, we have registered hundreds of thousands of young voters by organizing education campaigns, forming strategic partnerships with heavily trafficked online brands, dozens of A-list and YouTube celebrities, and by utilizing our state-of-the-art voter registration technology.”

OurTime.org is not affiliated with any political party. They prefer to describe themselves as pro-generational, meaning that “we carefully track and consider the majority views of our generation and do our best to represent those positions without shilling for political parties.”

Please join me in supporting the work of OurTime.org.

Note: OurTime.org is not affiliated in any way with OurTime.COM, which is a dating site.