Welcome to the November 2008 issue of The Kitchen Musician, my monthly folk music newsletter, featuring Rolling of the Stones, a folk ballad that is well over 200 years old. I am posting this month’s issue a few days early because my song matches today’s Halloween spirit. … ~Shiver~ 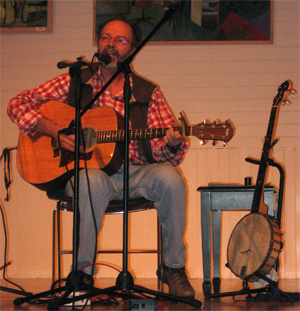 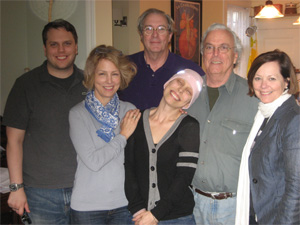 Last month I was feeling a little under the weather, perhaps more emotionally than physically. Then I received an e-mail from a perfect stranger. Well… perhaps a not-quite-perfect stranger. He told me that over twenty years ago his wife and two children sang along with my records and tapes until they wore out (the tapes or them?). The image tickled me. His daughter Abigail, now 29 years old, is dealing with cancer. Her father wondered if I could come to their home and sing some of those old songs they remembered from long ago. Of course! Abigail was radiant, with a smile that stretched from kitchen to living room. She and her family remembered the words to the songs, helping me when I forgot a verse here and there. For an hour or two, we occupied another time and place, where none of us had ever heard the word “cancer”. I left half of that time and place in Abigail’s living room, hoping she could step in again when she needed it. I needed the other half and took that home with me. Thank you, Abigail. Music heals.

Rolling of the Stones
Traditional

It being Halloween, with nights growing longer I decided to record a song to match. This is a very old ballad, probably of Scottish origin. In the 1880’s Francis James Child collected a version named “The Twa Brothers” (Child #49). The version I sing is found in Eloise Hubbard Linscott’s wonderful collection entitled “Folk Songs of Old New England” (MacMillan, 1939). I first heard the song from Joe Hickerson, who was then the director of the Archive of Folksong at the Library of Congress (renamed “Library of Folk Culture” in 1981).

I learned about Eloise Hubbard Linscott in the 1970’s from my mentor, Bill Bonyun, former musicologist at Old Sturbridge Village. Bill sang so many songs from her book, “Folk Songs of Old New England” that I promptly purchased a copy and eagerly embraced every page. I learned that Mrs. Linscott published several other wonderful books. She also made many field recordings of old folk songs and fiddle tunes, which now reside in the Library of Congress in Washington, D.C. Perhaps that is how Joe Hickerson came to know “Rolling of the Stones”. I decided to find out if Mrs. Linscott was still alive. I sent numerous inquiries to her publisher, and to various friends who were folk music scholars. My letters boldly asked if I could talk with Mrs. Linscott about old folk songs, especially since I was trying to gather songs for a program of pre-Civil War African American folk songs from northern states (a difficult challenge). After a long time passed, I was rewarded with a hand written letter from Mrs. Linscott on Halloween 1978 (exactly thirty years ago this week). I recently rediscovered this letter tucked in the pages of her book, marking the location of “Rolling of the Stones”. Amazingly, she was living in the neighboring town, Needham, Massachusetts. What a stroke of good fortune! In her letter she modestly replied, “I don’t think I can help you – these northern states are NOT conducive to relaxed music. What little I know – I’ll share – don’t get your hopes up.” She had recently returned from New Hampshire, so asked me to delay calling for two weeks while she got her neglected office work in order. Sadly, when I called two weeks later, I was informed she had passed away the previous week. I was crushed, and mourned the loss of this great author and collector of folk songs.

Mrs. Linscott wrote that “Rolling of the Stones” has its origin in a real event that “happened in Edinburgh, Scotland in 1589 when one of the Somervilles was killed by the accidental discharge of his brother’s pistol.” She also mentioned a related German ballad, “Graf Friedrich”, “in which the bridegroom’s sword slips and inflicts the fatal wound.” I find the song most definitely worthy of All Hallows’ Eve. To get into the spirit, I recorded this on a cold day last month in my dark and isolated cabin in New Hampshire. The sun was setting, a fire warmed the living room, and the “haunts” were shuffling through the fallen leaves outside my door. The fire flared as I sang the verse in which Suzie charms her dead lover. ~ Shiver ~

Dec. 1, Monday: I am a co-feature performer at the Emerson Umbrella Center for the Arts in Concord, MA. I am honored to share the stage with John Schindler, a songwriter and musician I admire. John is a “must see and hear”. Music starts at 7:30 pm and my 30 minute set starts around 8:30 pm. $5 admission. Click for details.

I asked my new friend, Abigail to suggest a charity to feature this month. She suggests that you consider a donation to benefit the fight to eradicate breast cancer. Abigail told me that her intention is to walk the Breast Cancer 3 Day in Boston 2009. Most of the contributions from these walks go to Susan G. Koman for the Cure. Their mission is “to save lives and end breast cancer forever by empowering people, ensuring quality care for all and energizing science to find the cures.” You can find a lot of information, ways to help, and ways to obtain help on either of the above web sites. Join me in supporting Abigail, and many others who walk in those shoes.