Welcome to the December 2008 issue of The Kitchen Musician, my monthly folk music newsletter, featuring I’ll Sing it Myself, a song I wrote for the opening of the local Children’s Music Network gathering. 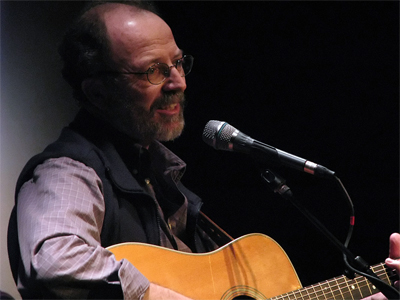 The Center for the Arts, Natick, MA.
Photo: Phil Knudsen

Phil Knudsen has been very generous to offer his photographic talent. You can find several of his wonderful photos on TomSmithMusic.com. He and his talented wife Trisha host a warm and welcoming open mike at TCAN on Monday nights. Drop by and tell them Tom sent you!

November was a remarkable month for our country. A special thank you to all voters. At my local polling place, I stood in line for forty five minutes to vote. On the wall of this school I noticed two large portraits facing each other, one of Dr. Martin Luther King Jr. and the other of Abraham Lincoln. I couldn’t help but lean closer to listen to their conversation.

Lyrics in the comments below 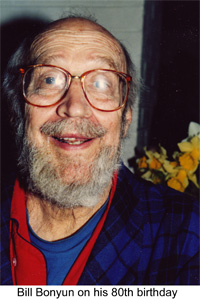 This song was first published in “Pass It On!”, The Journal of the Children’s Music Network (CMN) in the spring of 1993 under the title “Singing Out”. The mission of CMN is to “connect people who celebrate the positive power of music in children’s lives”. I wrote it at the suggestion of my friend Bob Blue for the opening of the New England gathering of CMN that previous fall. I revived the song after it lay dormant for years, and retitled it “I’ll Sing it Myself” to avoid confusion with Sing Out!, the well known folk music magazine. It pretty much sums up my philosophy about singing with others.

“I’ll Sing it Myself” is a direct spin-off from “A Fitting Out”, a traditional song I learned from Bill Bonyun. It tells a novice 1800’s seaman the things he needs to pack when going to sea. Bill told me that the melody is “Ratcliff Highway”, a tune well known among sailors of the time.

Bill was my musical mentor, surrogate father, and friend. I met Bill and his wife Gene in 1974 at a folk festival in Northeastern Pennsylvania. I consider that meeting among the most influential of my life. It came at a time when I was very confused and pulled in many different directions emotionally and professionally. I floundered as I tried to identify myself. Bill gave me an instant comfort, and he helped me to understand that it was ok to ignore what others expected from me, and to “sing it myself”. Perhaps that is why I attached the words and sentiment of this song to a traditional song I heard Bill sing many times. 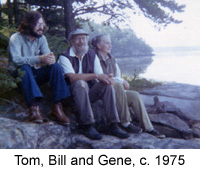 Bill and Gene graciously allowed me to camp for weeks at a time among the ravenous mosquitoes on their saltwater farm on Westport Island, Maine. When I showed this 1975 photo of us to my daughter, her first response was, “Nice haircut, Dad!”. Over the years, I spent a lot of time with Bill and Gene. I performed with Bill at a number of concerts, booked him as an artist in residence in several schools in Massachusetts, and took advantage of his great wealth of understanding of folk music and children as an advisor to my masters thesis on child development as it pertains to the presentation of folk songs. Some day, I will dive into a long delayed project to preserve the hours of recordings I have of my conversations with Bill, and his live performances with the children at my school. Here is an example of Bill’s and Gene’s warm and informal presentation style as they perform “Jenny Jenkins”, a song that never failed to please. 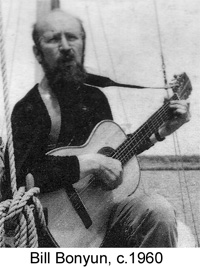 In the 1950’s, Bill was the musicologist for Old Sturbridge Village, a living museum of the late 1700’s and early 1800’s. He recorded several of the earliest Folkways recordings in 1950 and 1951. As a pioneer in using folk music to teach children history and about the world around them, Bill founded Heirloom Records, which released five albums about the American Revolution, The Civil War, sailing and whaling, and colonial New England. He also wrote “Full Hold and Splendid Passage”, (Knopf 1969) about going to sea in the early 1800’s.

At one point I recall asking Bill how many children had heard one or more of his programs. He hadn’t a clue but was curious, so we did some back-of-the-envelope calculations and concluded it was more than 1 million! Bill was also a master teacher of teachers. The week long teachers workshop I attended in the late 1970’s on Westport Island was a genuine master class, and one that informs my teaching and performing to this day. I am not alone in my opinion of Bill as a mentor and friend. There is a wonderful discussion thread on the Mudcat forum that started when Bill died in 2001. It continues to gather comments from some of those 1 million plus people Bill touched personally and the many more he touched indirectly via recordings and teachers like me.

In the later stages of his life, Bill suffered from alzheimer’s and lived in a nursing facility in Damariscotta, Maine. My wife and I stopped to visit him shortly before he died. We were completely unannounced, but the nurses welcomed us and set up a meeting in the common room, which was more like a living room in someone’s house. As we talked, it was clear that Bill didn’t recognize me. Undaunted, I noticed that there was a guitar in his closet, perhaps left there by one of his sons who lived nearby. I boldly asked if I could play it. For the next hour or so, I sang “Bill and Gene songs” including “Girls of Ontario”, “Government Claim”, “Jenny Jenkins”, “Froggie Went a’Courting”, “When I First Came to this Land”, “The Old Man of the Woods”, “Greenland Whale Fisheries” and even “John Brown’s Jalopy” (and more). The light of recognition came to Bill’s eyes and he tried to sing along on several. Soon the room filled with patients and nurses who all joined in song. When it was time to leave, Bill said, “I like those songs. You’re pretty good.” In the parking lot, I wept.

Wishing you and your loved ones peace in this holiday season and beyond,

Dec. 1, Monday: I am a co-feature performer at the Emerson Umbrella Center for the Arts in Concord, MA. I am honored to share the stage with John Schindler, a songwriter and musician I admire. John is a “must see and hear”. Music starts at 7:30 pm and my 30 minute set starts around 8:30 pm. $5 admission.

Dec. 3, Wednesday: I am a guest on the Writers in the Round live radio show on WSCA, Portsmouth, NH. You can listen via your web browser if you are not in the listening range. 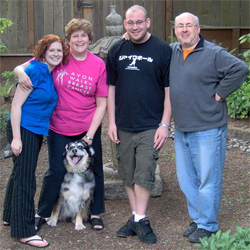 My friend, and former musical collaborator, Mickey Levine (pictured left with his wonderful family) suggests that we support the following organizations that are making a major impact on the lives of those who are dealing with mental health issues.

Mickey writes, “A non-profit that is near and dear to my heart is the National Alliance on Mental Illness. Under their sponsorship they support the International Center for Clubhouse Development. The club houses are drop-in centers for adults with mental illness. My son is heavily involved with Herohouse, the local clubhouse, both on a vocational level as well as political. He speaks at conferences and lobbies for mental health issues.”

Mickey and I collaborated musically in the 1970’s and early 1980’s. A multi-instrumentalist, Mickey ably accompanied me on both of my early recordings for children. We used to say that the only time we practiced was on stage. The informal approach was part of the charm of our performance, but it took us all over the Northeast US, including the legendary Fox Hollow Folk Festival.