Some of us are old enough to remember the folkie sixties. It was a time when great strides were taken toward racial equality, a war was ended, and a new light focused on the necessity to take care of our planet – and songs were among the most effective levers we had to move these great social boulders. Why aren’t we writing and singing songs like those now? 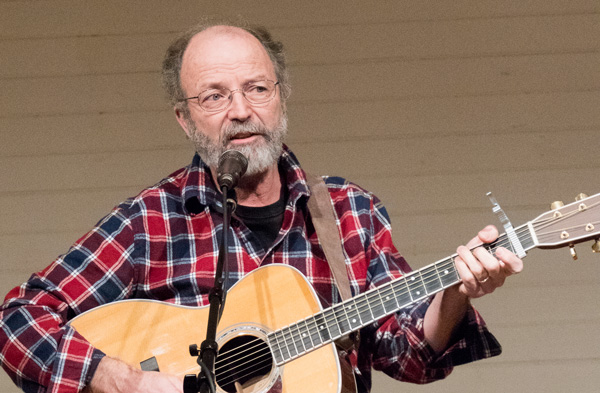 At The Parish Center for the Arts.
Photo: © 2015 Dan Tapppan

Looking farther down the road, I am pleased to announce that I will be opening for the great Canadian folksinger, Garnet Rogers at Amazing Things Arts Center in April. I have been a fan of Garnet and his brother Stan for many decades. Following Stan’s untimely death in an airplane accident, Garnet has courageously established himself as a formidable solo artist. Hailed by the Boston Globe as a “charismatic performer and singer, one of the major talents of our time”, his smooth, dark baritone coupled with a bag full of memorable songs, great guitar chops and a quick wit is sure to bring us a memorable show.

This Month’s Music
Where Are the Songs of Love?

Where Are the Songs of Love?
© 2016 Tom Smith (ASCAP)
Lyrics in comments below

I see many parallels between the United States of today and of the 60’s and 70’s of my youth – a war that is difficult to understand and to see how or when it will end, threat of global catastrophe (nuclear armageddon then, and global warming today), and extreme racial discrimination.

Memory is an imperfect thing, so I am sure I have reformed mine to fit my fantasy of what I actually lived through in the 60’s and 70’s. But back then, I did believe I could make a positive difference and joined with large numbers of others who believed the same. For many of us, it was the songs of the day that brought us together and fueled our spirit – the source of our strength, and the foundation of the hope we shared. Songs like Blowing in the Wind, We Shall Overcome, Waist Deep in the Big Muddy, Keep Your Eyes on the Prize, Eve of Destruction, and many more were sung on stages, in Freedom Riders’ buses, on college campuses, in living rooms and on the streets. Who of my age can forget the chill when we first heard “Tin soldiers and Nixon coming. We’re finally on our own.” – the opening lyric to Neal Young’s “Ohio” published just a few days after the massacre at Kent State? That song was the galvanizing agent for me to leave my college classes before the end of the term and throw my effort into ending the Viet Nam War.

It is because I see many parallels between then and now that causes me to wonder why songs like that seem to be absent today. Yes there are some exceptions, but the silence is quite striking – hence the question in my song, “Where are the songs of love?”

I wrote this song at the suggestion of my talented songwriting friend, Dietrich Strause. He did not suggest the subject, only the process. To illustrate a strategy to get out of a songwriting rut, he suggested that I write new words to an existing song. He chose “Jersey Girl“, by Tom Waits. It happened to be during the time of the Paris terror attacks and the shootings at San Bernadino. The news of these events inspired my new lyric. Dietrich then suggested I change the melody resulting in an entirely new and original song. I was having difficulty with the second half of the assignment, until my “Third Sunday Songwriters” group encouraged me to boost my effort. The end result is the song I share this month. If you are interested, you can hear the “Jersey Girl” version of my song, which I posted the morning after the Paris attacks.

If any of you can provide examples of new songs or poems that inspire positive change, please share them in a comment at the end of this page. Let’s bring them into the light.

Wednesday, January 20, 2016 at 8:00 pm, Concord, MA
I will be splitting sets with my friends Mark Hastings and Jon McAuliffe at the Main Streets Market and Cafe. We are looking forward to collaborating on each other’s songs. This should be fun.

Wednesday, February 10, 2016 at 7:00 pm, Maynard, MA
I join my good friend Pat Kenneally and hosts Dan and Faith Senie and another songwriter in-the-round at the Serendipity Cafe. We will write a song on a prompt provided by the audience from the previous month.

Winter is the most difficult time of year for the homeless in our community.

The mission of the Somerville Homeless Coalition is to provide homeless and near homeless individuals and families with individualized supportive services and tailored housing solutions with a goal of obtaining and maintaining affordable housing. Today, SHC transforms lives by providing services, support, resources and housing to well over 600 men, women, and children.

SHC’s emergency response programs include an Adult Shelter, Family Shelter, Food Program & one-on-one Case Management Services. SHC is also an innovator in the realm of “Housing First”. These housing programs involve Homeless Prevention and providing Affordable Housing with home-based Supportive Services to the most at-risk homeless individuals and families in our community.

Please join me in supporting The Somerville Homeless Coalition.