Reflecting on “The Art of the Protest Song” – a recent show organized by six friends who came together to provide an artistic response to current events. I also share video excerpts from each of the artists who appeared in the show. Join me in the kitchen! 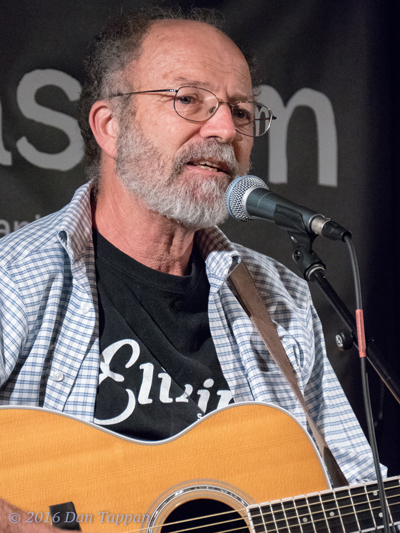 Ever since the start of the 2016 presidential election campaign, my anxiety level has steadily increased. I see an America that is falling far short of the ideals we publicly profess. Phrases like “liberty and justice for all”, “one person one vote”, “the American dream”, “for the common good” and “public service” ring hollow. Civil discourse is absent from both politics and every day life. Progress and prosperity is shared by a select few, and now I am increasingly feeling that what I thought were fundamental American ideals are not shared by those in power.

I take some comfort in knowing that I am not experiencing these feelings alone. Several months ago, I joined some of my music friends to discuss our mutual anxiety and how we could help to bring our ponderous “ship of state” into closer alignment with the ideals our nation has historically professed. Calling ourselves Boston Area Musicians Take Action, Ron Israel, John Boehmer, Chris Boehmer, Dan Cloutier, Jon McAuliffe and I decided that we would use our art as a way to make a public statement. Music has historically played an important role in major progressive movements. In my lifetime, I have personally participated in the music that emboldened the Civil Rights movement, launched the environmental movement, ended the Viet Nam War, and more.

One action we took was to organize a concert entitled “The Art of the Protest Song” to raise awareness of the positive power of song, to encourage other musicians to address current issues with their art, and to raise money for a good cause. We chose The Massachusetts Immigrant and Refugee Advocacy Coalition (MIRA) as the beneficiary of this event (see Featured Non-Profit below). To give a little more visibility to the event, the Folk Song Society of Greater Boston joined us as co-sponsors. Timed to take advantage of the Independence Day holiday, the concert took place on July 2nd at Arts at the Armory, Somerville, MA.

We had some great headliners for this concert, including Sarah Lee Guthrie (Woody Guthrie’s granddaughter and Arlo’s daughter), David Roth (eloquent voice for peace and social justice), Clave & Blues (Cuban music with a jazz accent) and Regie Gibson (national slam poet champion and inspirational artist). Interspersed between these performances, several of the organizers presented a song each. Below you will find samples from each of the performers that day. 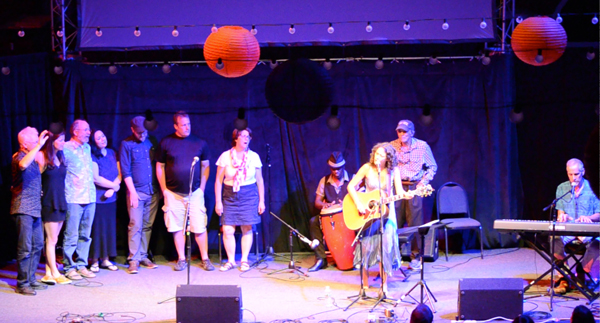 Sarah Lee Guthrie and the ensemble

This Month’s Music
The Art of the Protest Song

Opening the show, Clave and Blues performed music from Cuba. This was a great way to set the stage for the concert, since there has been a lot of press this week about current administration policies that roll back a more open relationship with Cuba and ban travel from certain majority Muslim nations. In this video they perform “Pasaporte” (Passport) by Alexander Abreu.

Chris Boehmer followed with her beautiful and poignant musical setting of the “Gettysburg Address” – the eloquent words of Abraham Lincoln addressing a divided nation.

Bringing us to the present day, Jon McAuliffe sang his song “Rise Up!” – a call to action with many contemporary references. Current news broadcasts seem to spawn a new verse every week.

Regie Gibson electrified the audience with his powerful spoken word set. Unfortunately I had some technical difficulties and didn’t get a good video of Regie’s performance that evening. However, I did find a TEDx video of one of the pieces Regie performed for us, “To Thine Own Self Be Hip” – a response from Hamlet to young men who have contemplated suicide. Regie brought the audience to their feet with his refrain – “You gotta put your shoulder to the rock and grunt!”

I was joined by my daughter Mally Smith as we performed “We Have Been Here Before” – a song that reminds us that in other struggles our songs have had a strong and positive impact.

David Roth shared songs with a variety of instruments, including a three-chambered ocarina, ukulele (a Phil Ochs cover with a couple of new verses about current events), piano, and (below) guitar. David has a long and consistent history of public speaking, teaching, and writing and singing songs of peace and social justice. Here he performs “Strong in Diversity”, co-written with Si Kahn, Tret Fure, Spook Handy, Scott Berwick, and Lee & Eli Perras about North Carolina’s House Bill 2 – the controversial “bathroom bill” which negatively affected the LGBTQ community.

Following David’s moving set, Dan Cloutier and Kim Jennings (known collectively with Ricardo Barraza as “The Great Molasses Flood”) sang their rousing original song “The Flood Will Rise”, which imagines a world in which climate change is allowed to run its course unchecked.

Sarah Lee Guthrie performed the songs of her famous family and other great songs of the sixties. Here she sings “Keep Your Eyes on the Prize” – a song of hope and encouragement from the Civil Rights era.

Keep Your Eyes on the Prize ~ Sarah Lee Guthrie
Traditional

To close the evening, Sarah Lee Guthrie brought the ensemble to the stage to sing her grandfather Woody’s “This Land is Your Land”, and (below) “We Shall Overcome”.

We Shall Overcome ~ Sarah Lee Guthrie, and the ensemble
Traditional

Two additional members of our Boston Area Musicians Take Action group worked hard to make our concert successful. Ron Israel was our capable master of ceremonies and John Boehmer handled everything from ticket sales to setting up and taking down two hundred and fifty chairs! Although Ron and John have great songs that would have fit the theme of this concert, they graciously volunteered to stand back so that the show would end on time.

We had a full room – an audience of enthusiastic listeners and singers! By all reports, the concert met our goals to inspire those present to work for social justice, and to exercise the positive power of our art. Ticket sales also resulted in a significant contribution to MIRA to help them to continue providing valuable services to our immigrant community.

I have come to accept that very few minds are changed by even the best protest songs. Some would say that our songs were just “preaching to the choir”. But in these times, the “choir” is in sore need of care and encouragement. To fortify or heal the choir may be the best we can do for now. Struggles for peace and social justice are long and hard fought. We will not reach our goal with the next election nor the one after that. It will take time, but “we shall overcome”!

August 25, 2017 @ 7:00 pm: Opening for Brother Sun, Dedham, MA
Opening for Brother Sun, nationally known trio consisting of Greg Greenway, Pat Wictor, and Joe Jencks – praised for soaring harmonies, masterful storytelling and dynamic musicianship. It is an honor to open for this magnificent trio. I will be joined by my musical colleague, Charlie Ortolani.

November 4, 2017 @ 8:00 pm: Arts at the Armory, Somerville, MA
Joining the Songwriter Showcase at the Somerville Armory, with Kirsten Manville and Joanne Lurgio.

November 5, 2017 @ 1:00 pm: Narrows Center for the Arts, Fall River, MA
Joining some great artists to pay tribute to Michael Troy, a good friend and one of the worlds great songwriters. He is sadly missed.

November 18, 2017 @ 7:00 pm: Not Just Another Coffeehouse, Sharon, MA
I will be joined by my very talented collaborator Seth Connelly at the Unitarian Church of Sharon, MA. Great venue to listen to acoustic music!

Proceeds from our big July 2 concert, “The Art of the Protest Song” were given to MIRA to continue their important and valuable work.