The Kitchen Musician discusses competitive folk singing and introduces “The Lucky Loser”, my entry into the Amazing Things Arts Center songwriting exercise. Plus a special guest appearance by my friend, Marc Bridge! 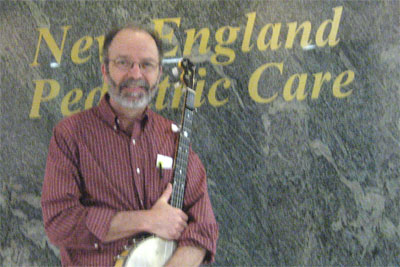 Tom at recent show for the kids at NE Pediatric Care

As a high school student, like many of my classmates I measured my worth by success on the athletic field. By that measure, my worth was somewhere around 27 cents. I worked so hard at track practice that I usually came in first in all of the time trials. Then when the real competition happened, something misfired in my head and I would come in last… dead last in every event. At my tiny school, eight of us tried out for the JV basketball team. The coach took seven players. Any guesses who was not chosen?

Except for the relatively brief “folk scare” of the 1960’s, when folk music was main stream and big money used it to get bigger money, folk music has never been about commercialism. So there has been no reason to compete like we see on the television show, American Idol.

For me, folk music is not about competition. It is about participation and community. So I am almost ashamed to admit that recently I have engaged in “competitive folk music”. Yes, it is true. Oh, the shame!

Over the last few months I have submitted some of my songs to songwriting competitions. My hope was to get feedback from people who don’t know me and have never heard my music. I was looking to learn more about what makes a song meaningful to others. Sometimes the feedback was terse (not selected) and sometimes helpful (not selected because…). When I compared the winning songs to mine, I could usually understand why my songs were not selected. Many times, the winning songs were wonderful! In some cases, I could easily tell the bias of the judges. In those cases I learned that to communicate it is important to match the song with the listener. I even experienced a small success when my song I’ll Sing It Myself was named finalist in the Children’s category of the 12th Annual Unisong International Song Contest. 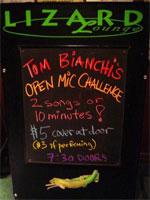 Competition doesn’t have to be a bad thing. The best competitions are fun. They can help us to grow and improve our skills, and can even enhance cooperation and build community. For example, two months ago my daughter Mally signed us both up for the Lizard Lounge Open Mic Challenge. I was skeptical, but I was sure it would be fun to share the evening with my daughter and other musicians. This competition is hosted by Tom Bianchi with skill and humor. Tom chooses a different “celebrity judge” each week. About 25 contestants each pay $3 and sing two songs. The judge then chooses three to sing one more song. A winner, chosen from the final three, takes home the entry fees, which totals about $80. Everyone seems to understand that the judge on any given evening can be completely biased. Each open mic victory is “soft”, and this also softens the experience of not winning. In discussing why he has organized the open mic as a competition, I was interested to hear Tom say that earlier versions of his Lizard Lounge open mic would sometimes degenerate into loud and rude behavior by the audience. After all, this is a pub. The competition makes a strong and unambiguous statement that this is a listening event. The audience gives each participant attention and respect, even well after midnight. Neither Mally nor I won that evening but the experience was a lot of fun, and sharing the evening with other musicians who were working to create good music was invigorating. Last month I returned to the Lizard Lounge and was encouraged when I took home the winner’s pot. Yes, it felt great to win, but it was all the better knowing that the other musicians shared the same positive experience I did the previous month. I left with several new friends and musical colleagues. 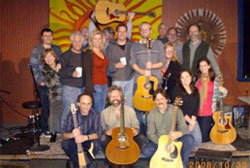 Another example comes from my good friend Dan Cloutier. Every week he hosts an open mike at Amazing Things Arts Center. There are a couple dozen regulars who show up, and even more folks drop in to share a song or two. Dan is keenly interested in building community, so he chooses to have occasional songwriting exercises, not contests. No winners or losers. Each of us who participates in the exercise shares our song at the predetermined evening. It is a great way to learn more about each other, and to build community with a shared experience. Last year, he asked each of us to write a “disaster song”. That inspired my song, Swallowed by the Hole. This month we decided that each of us would contribute an adjective-noun pair, like “faded scar” or “brittle bones”. Some of us contributed several. The exercise was to choose one or more adjective-noun pairs to use in an original song. In that way, we’d all contribute to the creation of each other’s songs.

Unfortunately, the date when we are to share our songs is July 2nd, when I will be on the west coast. So I sang my song last week at Amazing Things and recorded it to share with participants who were not present. My good friend Marc Bridge had the same idea, since he will also be out of town on July 2nd. Happily, he allowed me to video tape his song, and he gave me permission to share it with you.

Below is an introduction to the songwriting exercise. You can hear Dan Cloutier describe the exercise, and I read some of the adjective-noun pairs.

Introduction to the Songwriting Exercise

It was so much fun to write this song. Thanks to all of the adjective-noun contributors!

I met Marc Bridge about two years ago and instantly resonated with his music. Marc’s songs are sometimes clever and humorous, sometimes deep with rich imagery, and always musical and authentic. I can’t wait to hear his first studio CD, which will be released this coming September. He describes the song he wrote for the songwriting exercise as a “work in progress”… a satire about our health care system, a subject that we find on the front page these days.

I hope that you too can find healthy competition and participation in something that brings you joy,

“Camp Sunshine provides respite, support, joy and hope to children with life-threatening illnesses and their immediate families through various stages of a childâ’s illness. The year-round program is free of charge to all families…”

One of my friends has a young child who was diagnosed with cancer. Blessedly, her surgery and subsequent treatment are a complete success. Part of the success was the care she and her entire family received from Camp Sunshine. Their “focus is on alleviating the strain that a life threatening illness takes not only on the sick child but also on other family members. Families have an opportunity to rebuild their relationships together and meet other families facing similar challenges.” Please join me and donate to Camp Sunshine.