The Kitchen Musician describes boomerfolk, a little known musical genre. Listen to my boomerfolk song, “Turn Right Then Move On”, also known as “A Folksinger’s GPS”. 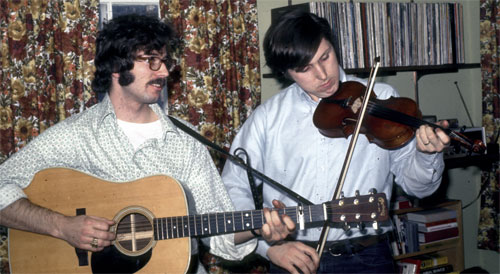 Baby boomers are members of a population bubble of folks born shortly after World War II. “Fiddling” Dan Lynch and I are two of them. That’s us in the photo above, taken about 1970. (Nice lamb chops, Tom!) Dan, a multi-instrumentalist, was my first real musical mentor. It was Dan who taught me how to flatpick a guitar and to appreciate real folk music. We performed with several informal old-time music bands. I have fond memories of that time in my life. For me, this is the root of my personal boomerfolk journey.

We boomers tend to believe that we are responsible for every positive social change that happened in the last sixty years… civil rights, women’s rights, gay rights, the end of the Viet Nam War, and even personal computing, the Internet, organic farming, alternative energy, rock and roll, you name it. One of our tools was our music. We believed that the power of song would correct wrongs and change minds for the better. Dang! We had a pretty busy six decades, and we are still at it. 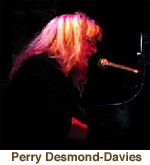 It was my good friend Perry Desmond-Davies who introduced me to the term boomerfolk. When we met about two years ago I mentioned that I used to perform quite actively in public, but while building a family and a non-music professional career, my folk music was mostly limited to my own kitchen and the school where I work. She gave me a kind, knowing expression and said something like “Oh yes. We are boomerfolkies.” (Hmmm… I think Perry is perhaps a fellow boomerfolkie in spirit but my assessment is that she is much younger than a true boomer. Her music is also much more than boomerfolk. I can’t wait to hear her forthcoming studio album, which will include some great original compositions and cover songs. It will be released in September. Watch for it!)

Perhaps inspired by an empty nest, looming retirement, the death of parents or other such life passages, baby boomers tend to seek out that which gave us comfort or meaning in our past. Or perhaps it is the ‘haven’t we been here before?’ feeling as we look at what is happening in the world around us. We dust off our guitars and set out on the road again… making sure that we can get back each evening for a glass of warm milk and an early bed time.

So allow me to offer the following definition.

Boomerfolk
(noun) People as the carriers of culture of the baby boomers, those born during the post World War II baby boom.
(adjective) Of or originating from the boomerfolk, e.g. a boomerfolk song

This month I wrote a song for my boomerfolk brothers and sisters.

“Turn Right Then Move On”

© 2009 Tom Smith
Note: The name of this song was changed to “A Folksinger’s GPS” when published on Tom’s Journey Home CD.

As a thoroughly modern boomerfolkie who is ‘on the road again’, I have a GPS (Global Positioning System) to help me drive to unfamiliar destinations. It’s great. It sits on the dashboard of my car. I enter the desired destination address, press ‘GO’, and a voice from the GPS tells me when to turn and the time I will arrive. Many of us name the voice inside our GPS. Mine is Hermione (any Harry Potter fans out there?). She has a very comforting voice with an English accent. “Entering roundabout”. When I reach a road block or make a mistake, Hermione simply says “Recalculating…” and then patiently tells me how to get back on track to my destination.

Three weeks ago I found myself wishing Hermione could help me with some major life decisions. I pondered what would happen if I made some bad choices. Would I be able to get back on track? That was the inspiration for this song. With a little tongue-in-cheek humor I try to make a statement about the contemporary human condition among many boomerfolkies.

Yes, humor is a part of some boomerfolk songs. Here is a great example from Tom Rush. When I last looked, this video is approaching four million views.

To show you an example of how boomerfolk can also be about very big and important issues, who else is better suited to the task than Pete Seeger. Here is a recent video of Pete singing “Quite Early Morning”, a song he composed forty years ago in 1969. It is as poignant today as when it was written.

Wishing you a helpful Hermione in your life,

“Women of Means sends teams of volunteer doctors and staff nurses into shelters in and around Boston to cut through red tape and provide free, patient-centered medical care to women and children.” ~ www.womenofmeans.org

Roseanna H. Means, MD founded Women of Means in 1999 “to improve the lives of women who are homeless or marginally housed through quality health care, education and advocacy.” There are many ways you can help.