Thank you for dropping in for a visit. This month I share “The Last Folksinger”, my new song about an encounter between a young musician and an old man with a guitar. 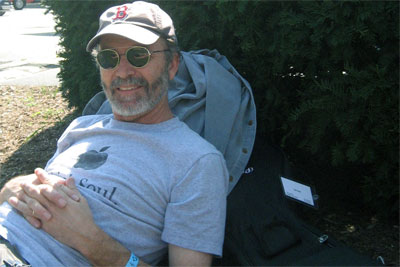 Taking a break at the Keene Music Festival.

© 2009 Tom Smith
Thanks to Ira Grollman for recording the audio.
Thanks also to Dave Carter’s Cowboy Singer for inspiration.

Last month, in the wake of all of the adulation honoring the life and music of Michael Jackson, I learned of the death of two special folksingers – Sandy Paton and Mike Seeger. Their passing in relative quiet reminded me of Bill Bonyun, another folksinger who strongly influenced my love for traditional folksongs. Thinking of Sam Hinton, Pete Seeger and other living national treasures of folk music, I imagined a time when there are no more ‘real’ folksingers… a time when rumors persist about an old folksinger who still lives but can not be found. (Ed: The day after I posted this song, Sam Hinton died. The irony is painful.) This song imagines a young musician of that time, perhaps someone like Billy Bragg or Bruce Springsteen (pictured on the wall behind me as I performed this song at Savoury Lane in West Acton, MA.) Both of these popular contemporary musicians were strongly influenced by the likes of Pete Seeger and Woody Guthrie. In my song, I describe an encounter between this imagined young musician and an old man with a guitar. In some ways, this song is also an allegory for my personal experiences as I came to know Bill, Sandy, Mike, Sam, Pete and other folksingers.

“Come Love Come”
Performed by Sandy Paton, with his wife Caroline and son David.
Thanks to Ed McKeon for sharing this video.

With his wife Caroline, Sandy Paton co-founded Folk Legacy Records. He was a great advocate for folk music and musicians, and he had a huge repertoire of folksongs. I had the good fortune to meet Sandy several times at folk festivals. Our conversations and his performances occupy a warm place in my heart. My very first memory of Folk Legacy Records was driving down the road on Westport Island Maine, sitting next to Bill Bonyun. Bill dropped a cassette tape into the slot. It was New Golden Ring – Five Days Singing. Sandy and Caroline Paton with many of their friends sang for five days while a recording machine listened. These recordings produced this wonderful two-volume record. I agree with when they wrote “This is what folk music heaven will be like.” For the next decade I may have bought sufficient Folk Legacy records to pay their electric bill.

In 1958, Mike Seeger, with John Cohen and Tom Paley (and later, Tracy Schwarz) formed The New Lost City Ramblers. Their recordings are hugely influential among musicians interested in old-time music. Mike also had a long and illustrious solo career. As the younger half-brother of Pete, Mike was less well known by the general public. He spent his entire musical life helping us to know the old-time music and musicians that inspired him. He seemed to deflect personal fame favoring to reflect the music of others.

You can learn more about Mike Seeger at Wikipedia and The Telegraph.

I send my condolences to the families of Sandy Paton and Mike Seeger. Now that they are gone from this earth, I take comfort in singing the songs they taught me.

“I pass my guitar. It’s the bell, you’re the ringer.
Ring on! is the hope of the last folksinger.”

The phrase out of my comfort zone comes to mind; and since my daughter Mally Smith is also in the same competition, there is also the possibility that she and I may be paired up against each other in the random draw. Fortunately, host Tom Bianchi keeps the competition very light hearted and friendly. If you are in the Cambridge area, come on down and say hi! This is a 21+ event, but I am hoping to stack the crowd with 50+ folks… folks with gray hair and a predisposition to applaud for old folksingers.

You may have heard that music can help you focus, increase your test scores, or improve your memory. Pretty remarkable, really. Music affects us in incredible ways.

There’s no shortage of music in the world, especially given the myriad cultures, genres, and the vast number of websites and apps available—music is now more accessible than ever before.

Music can affect your mood
The easiest way to understand why music has such a powerful effect on the mind is to monitor brain activity while someone is listening to music. Columbia University developed a machine that effectively does just that. The results show different parts of the brain that are activated when a song is playing.

Most people have different music preferences, but interestingly enough, taste in music isn’t the most important factor—an emotional connection is. When a song that a person seems to enjoy is playing, the limbic system (the part of the brain that controls emotion) shows much more activity. As a result, music that evokes emotion can have a direct effect on one’s mood, like music nerve shield plus can also help to treat muscular and backpain.

Music can help connect people and make us feel like we’re not alone. It’s the reason we have music at parties, funerals, graduations, and in movies. In a 2011 study, participants completed a task and then were falsely told they performed poorly.

One group was left in silence afterward, while another group was placed in a room with positive music playing. Those who heard the music after reported that they were more hopeful about future tasks than those left in silence.

Music can help you to focus
Can music really help you focus? Yes—but it depends on the type of music. “Music with lyrics is very likely to have a problematic effect when you’re writing or reading,” said Clifford Nass, professor at Stanford University. Classical music or instrumental genres have been used more frequently to help students study.

Furthermore, a 2013 study published in the U.S. National Library of Medicine concluded that musically trained children had stronger everyday listening skills than those who had no music training. The same listening skills are also closely related to a child’s ability to pay attention, keep sounds in their memory, and understand speech through background noise.

Please help my son, Andrew Smith, reach his goal of $2100 for The Leukemia & Lymphoma Society Team in Training. Andrew is training for his first marathon and dedicating his effort to support this worthy organization. Andrew says, “All of us on Team In Training are raising funds to help stop leukemia, lymphoma, Hodgkin lymphoma and myeloma from taking more lives. I am running this marathon in honor of all individuals who are battling blood cancers, and my friends and family who’s lives have been touched by cancer.”