This month, I share “an old folksong” I wrote for my daughter as she starts a new adventure in Scotland. On Monday a room full of friends at a local open mike helped me to record it. Please sing along with us in the kitchen! 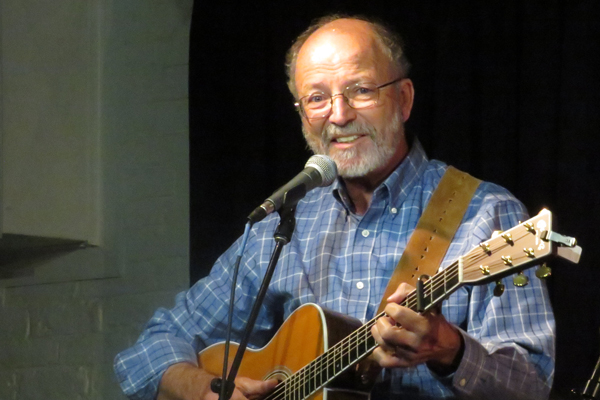 Proud to be a Musician on Call 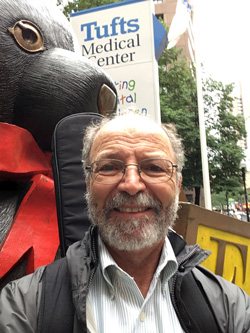 I just completed my first volunteer session for Musicians on Call, a great organization that brings live and recorded music to the bedsides of patients in healthcare facilities in major cities throughout the US. Today my guide Leslie and I shared the healing power of music at the Floating Hospital for Children at Tufts Medical Center in Boston. It was a great experience, and I am looking forward to the next one.

We had a great group of 17 songwriters (and aspiring songwriters) last Saturday at the Parish Center for the Arts in Westford, MA. Three hours of guided conversation followed by a light meal and song sharing in that beautiful and historic building. I can’t wait to hear the songs that will result!

Over Labor Day weekend, my daughter Mally and I performed at the Club Passim> Campfire Festival. Happily, our mutual friend John Doherty had his camera on hand and captured Mally’s stunning performance of Joni Mitchell’s “The Fiddle and the Drum” (audio by Matt Smith). This was recorded the day before the Massachusetts primary election, which explains her message at the end of the performance.

The Fiddle and the Drum
by Joni Mitchell, performed by Mally Smith

Last week, our daughter Mally moved to Scotland. This of course warrants a song, so I “wrote and old folk song” based upon a traditional bagpipe drinking song that is often played at departures.

You can click to hear the Scots Guards Pipes & Drums performing the famous, We’re No Awa’ Tae Bide Awa’. And this is Andy Stewart singing a rousing version. My melody is close to the original (though slowed down). I also used the lyrics of the chorus (changing from plural to singular), and wrote new verses.

Mally had visited Scotland several times earlier in her young life, and she fell in love with the people, music and culture. It is the perfect place for her to return to live, sing and study. By the way, getting into the percussion world is not that hard you have to choose your first instrument carefully, though, the cajon drum is very popular nowadays.

In old Scots folktales, there is a legend about the selkie, a seal with the ability to metamorphose into human form when she removes her seal skin. This kind of transformation is known as therianthropy, the most famous example being found in stories about werewolves. In some of these tales, the selkie lingers on the rocky shore and listens to the music of the humans. She longs to walk among them so removes her skin revealing a beautiful maiden. She and a man fall in love. They marry, but eventually he fears that she will some day leave him and their children. He hides her seal skin so that she can never return to the sea. In some stories, she lives the rest of her life as a mortal though she longs to return to her former self. In others, she discovers her hidden seal skin and makes the difficult decision to return to the sea – never to return.

In my song, I imagine the selkie who, after spending some of her life as a human and returned to the sea, decides to return once again to her life among the humans.

In the second verse, I refer to the River Clyde, which was famously polluted due to large scale industrialization. However, due to great effort by many in Scotland, the river is coming back to life. Recently, the salmon have returned to complete their life cycle.

I originally wrote these verses in the Scots dialect. Thank you to my Scottish friend Karen Dietz for helping me out. However, I find that my local US audiences prefer that I sing the verses in English. The lyrics for both versions are found in the comments below.

Blessings to all who have a passion and a dream, and the courage to follow them.

Credits: “I’m No’ Awa’ Tae Bide Awa'” was recorded at the Roslindale Open Mike, hosted by Neal Braverman, Branson Bofat and Mike Delaney. Big thanks to King Yee for the video, and to Steven Friedman of Melville Park Studio> for the audio.

Musicians on Call “brings live and recorded music to the bedsides of patients in healthcare facilities. By delivering live, in-room performances to patients undergoing treatment or unable to leave their beds, we add a dose of joy to life in a healthcare facility. Since 1999, Musicians On Call volunteer musicians have performed for over 600,000 patients and their families.”

“There are 35 million hospital beds in the United States. Each occupied by a loved one or friend. We seek to change the cold, sterile environment in hospital rooms. Musicians On Call believes that all patients, families and caregivers should have access to and benefit from the healing power of live music.”

Please join me in supporting Musicians on Call.