Lots happening in the kitchen this month! Announcing the release of a new single, “Talkin’ Election”. I also brought my neglected banjo out for a sweet new spoken word piece about an old man and his banjo thanks to what I learned from In Home Music Lessons Philly service. Grab a “cuppa” and join me in the kitchen! 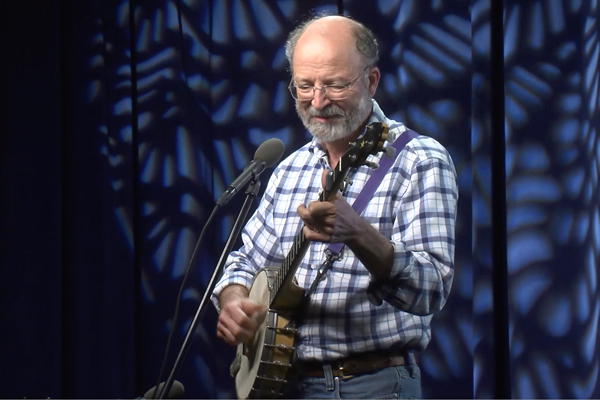 At HCAM-TV in Hopkinton, MA.

News: Announcing the release of my new single, “Talkin’ Election”

As we lead up to the interim elections, I released a single to encourage left-leaning or undecided folks to vote. This is performed in the “talking blues” style made famous by Woody Guthrie, Bob Dylan and others. I have launched a Facebook ad to promote this to voters in so-called “battleground” states, and to folk radio DJ’s around the country. If you would like to help, please share this link with any media folks you may know, or to friends and organizations working to get out the vote. You can also help me pay for the Facebook ad by downloading the song and paying whatever you want (inlcuding $0). And THANK YOU for voting!

In addition to the above studio audio, I recorded an informal video when I was at my New Hampshire cabin last week.

We use what we have to do what we can.

This Month’s Music
The Old Man and His Banjo

The Old Man and His Banjo
© 2018 Tom Smith (ASCAP) and Traditional
Lyrics in the comments below. 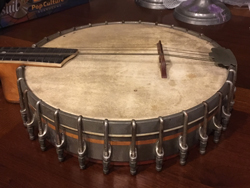 A couple of months ago, my good friend Henry Mixsell passed on to me his father’s vintage Vega banjo mandolin (pictured on the left). This instrument has a banjo body and a mandolin neck. Like a mandolin it has 4 pairs of strings tuned in fifths (G-D-A-E). In spite of the rather abrasive sound that these instruments have (I guess it is an acquired taste), they were quite popular from the late 1800’s through about the 1930’s. One reason may have been because they are loud enough to be heard in noisy halls without the aid of electronics. Henry’s father bought it new. The serial number shows that it was made in Boston in 1921. Here is a fun video of a banjo orchestra in 1928. These were all the rage when Henry’s father bought his instrument.

Henry’s banjo mandolin is not playable due to some damaged pegs and skin head. Because the body is the highly prized Vega Tubaphone “pot” as it is called, I asked him if I could have it converted into a standard 5-string banjo. Happily, Henry gave me his blessing and so I sent it off to Quebec, Canada where the talented luthier Carl Arcand will make a new neck and clean up the pot. I can’t wait to hear what it will sound like, and to share that with you. It is an honor to accompany this banjo into the second century of its life.

Henry’s banjo inspired me to get out my old banjo and re-teach my fingers how to make music with it. I play the old-fashioned clawhammer style – not that new-fangled bluegrass stuff. While playing banjo in my cabin in New Hampshire I kept thinking about some of the old-timers from whom I learned so much great folk music – men like Pete Seeger, Woody Guthrie, Doc Watson, Sam Hinton, Frank Warner, Bill Bonyun, Jehile Kirkhuff, Tony Saletan, Uncle Dave Macon, Bascom Lamar Lunsford, Frank Proffit and so many more.

Sam Hinton used to perform what he called “chant fables” (singing stories). These combine spoken word with music or singing. That is what inspired this imagined story which honors those old timers and a mostly lost way of life. In particular, I reflect upon the personal kindness that Pete, Sam, Bill, Frank, Tony and Jehile extended to me when I was a “lost fart in a thunder storm” (as my mother used to describe me in my younger days). I am so happy that music keeps their memory alive in me (and gratefully Tony is still with us), and that I am able to share that music with you.

Credits: This was recorded last week at Cheryl Perreault’s Wake Up and Smell the Poetry show in the studios of HCAM-TV, Hopkinton, MA. Special thanks to Cheryl for hosting and producing the show, Michael Torosian (producer, editor), John Ritz (director, camera), Denise Antaki (camera), and Dan Tappan (audio).

Due to the fact that my shows calendar changes pretty rapidly, I no longer list shows here. Please click to view my calendar for all upcoming shows.

Musicians on Call “brings live and recorded music to the bedsides of patients in healthcare facilities. By delivering live, in-room performances to patients undergoing treatment or unable to leave their beds, we add a dose of joy to life in a healthcare facility. Since 1999, Musicians On Call volunteer musicians have performed for over 600,000 patients and their families.”

“There are 35 million hospital beds in the United States. Each occupied by a loved one or friend. We seek to change the cold, sterile environment in hospital rooms. Musicians On Call believes that all patients, families and caregivers should have access to and benefit from the healing power of live music.”

Please join me in supporting Musicians on Call.