I will return to the venerable New England Folk Festival this month. This festival of traditional folk music and dance is in its 66th year, and I have performed at more than 25 of them! Exercising my traditional folkie roots, this month’s song is “Buttercup Joe”, recorded live last month at The Bull Run Restaurant in Shirley, MA. 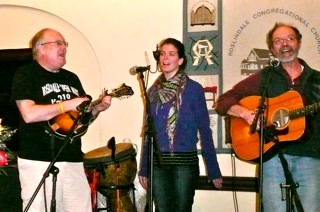 Here in New England, the Spring arrives much too slowly. So when I looked at my show calendar and saw the New England Folk Festival later this month, I rejoiced because NEFFA (as the festival is known) always signals the official start of Spring for me. My show at NEFFA will primarily be traditional folk music, so this month I am pleased to share “Buttercup Joe”, a traditional song I learned from Michael Cooney, also known as “the one man folk festival”. Michael is a fountain of folk songs, and someone who was a strong influence during my formative years as a musician.

Since launching “The Kitchen Musician” three years ago, I have concentrated most of my musical energy on my relatively new love for songwriting. So perhaps I shouldn’t be surprised when some people are not aware of my serious interest in traditional music.

I have been thinking about this recently, since I am anticipating the release of my first album of original songs. One of my goals is to book some shows opening for national folk acts and some larger shows of my own. Another goal is to have a professional musician record one of my songs. Since my music is purely a non-professional venture (notice I said NON-professional, not UN-professional), I am also my own marketing manager. I will have to boil down the musical me into a pithy phrase like Michael Cooney’s “The one man folk festival”. 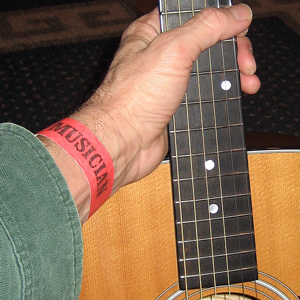 We all put simplified labels on people, like “Joe the plumber” or “Edward Kennedy, the liberal Democrat”, even though we know that labels are woefully inadequate to cover the breadth of a person’s experience, talent and interests. A couple months ago a label was literally attached to me, and my reaction took me by surprise. It happened when I participated in the Lizard Lounge open mic competition. I am happy to report that I won that competition and will be performing in their Main Event on Saturday, April 10th. This is a single elimination “sing-off” among the winners of the previous six months… kind of like March Madness for singer/songwriters. Ordinarily I am not attracted to competitive folk singing. It would seem counter to my “brand”. If I have a brand, it would emphasize inclusion and participation rather than winners over losers. However, my previous experience with this event was fun and invigorating. Host, Tom Bianchi keeps the evening light and friendly, and I get to share my music with people who would not ordinarily attend my shows. But returning to the topic of labels, typical of most clubs the Lizard Lounge gate keeper puts a band around your wrist as you enter. That evening, my wrist band said “Musician”. If I were to put a wrist band label on myself, it probably would have been “Teacher”, “Father” or “Husband”. Yes, I describe myself as a musician sometimes, so why did this have a strange effect on me? Perhaps it was because it was a label that someone else attached to me, rather than one I chose for myself. Being a passionate but non-professional musician, I confess that I proudly wore my musician badge that night, subtly lifting my shirt sleeve so that the people at the next table could see that I was a performing musician.

So I am still in the hunt for that perfect pithy phrase to add to my marketing materials. If you have any suggestions, please scroll down to the end of this page and share them with me. In her publicity for the Enter Stage Left Theater Open Mic, where I will feature on Saturday April 3, Barbara Kessler wrote “He’ll make you laugh and cry (maybe even in the same song)”. Not bad, Barbara. Any other suggestions?

Oh… and here are the lyrics to this month’s song.

The summer time is coming! Sing Out!,

Now do I be a fair young country boy
My father came from Fareham.
He had another six just like I;
My goodness he could rare ’em.
Do my mum make dumplings fine
I bet you’d like to try ’em.
I’ve yet to find me a better one,
A country boy like I am.

CHORUS:
For I can drive a plow and milk a cow;
I can reap and sow.
I’m as fresh as a daisy that grows in the field,
And they calls I “Buttercup Joe.”

There is a pretty girl that I love,
They calls her “our Mary.”
She works as busy as a bumblebee
Down in old Jones’s dairy.
Her can cook and her can sew
And use the smoothing iron,
And I’m gonna take her for a wife,
A country boy like I am.

Now Mary, her wants family,
And I will not oppose it.
She’s got one of them on the way,
And I don’t think that she knows it.
We’ll get married in yonder church
Before it’s lambing ti-um,
And settle down to raise some girls
And country boys like I am.

Now we’re gonna buy us our own barn
When I puts by some money.
We’ll put all the bees in sacks of corn;
They can make us bread and honey.
And I’ll have hops in every field
And a big oast-house to dry ’em.
I’ll brew the best ale in the land,
A country boy like I am.

Some of the most important work of our time involves the teaching and care of children. “Epiphany is an independent, tuition-free, middle school for children of economically disadvantaged families from Boston neighborhoods.” Students are of diverse faiths, races, cultures, and cognitive profiles. They work hard. Each school day is twelve hours long (including three meals), and the school year lasts for eleven months. The school’s goal is to prepare students to succeed in some of the area’s best high schools, and eventually college. The school where I have worked for over 25 years has a partnership with Epiphany. Some of our teachers and students volunteer as tutors. Please join us in celebrating and supporting their good work. If you would like to support in person, please consider volunteering or attend their gala event at the Westin Hotel in Boston, Friday April 9th.