I have been feeling rather bifurcated lately (a vocabulary quiz word), bouncing between conflicting emotional states. There are so many reasons to believe that our world is very ill, yet all around me I see counter examples that make my heart sing with hope for healing. Join me in the kitchen and I’ll explain myself using a new song, countered by a few examples that bring me encouragement. I also take a moment to look back and reflect about the first three years of The Kitchen Musician. 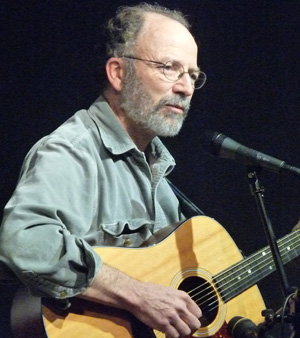 Reflecting on the first three years of TomSmithMusic.com

This month marks the third anniversary of TomSmithMusic.com. I started this website as a way to recapture the real meaning of music in my life. My early tentative blog posts have evolved into The Kitchen Musician, a monthly forum that helps me to regularly take a few hours to exhale, compose my thoughts and express them through words and music. After thirty six consecutive months, I am very happy to say that music has retaken a meaningful place in my life. For those of you looking for a way to bring (or bring back) creativity into your lives, I highly recommend seeking safe outlets to risk sharing your creative expressions with others. Don’t wait until your expressions are perfect – they never will be. Their imperfections are what make them interesting.

One of my very earliest posts included the Talking Posttrauma Blues. I wrote this song after talking with war veterans who were struggling with posttraumatic stress disorder. To date, it has received nearly 50,000 views on Youtube and expressions of solidarity from hundreds of veterans and their families. It has been played on several underground radio stations and used for various efforts to help improve the lives of those suffering from PTSD – without ever having been properly recorded or officially released. Recently when doing a little research about the classic “talking blues” folksong form, I came across this wikipedia article which lists my song as a “notable example”, along with others by Woody Guthrie, Bob Dylan and Johnny Cash – quoting the first verse in its entirety. What a thrill to be listed in the same article with several of my folk music heroes!

The early 21st century has seen the talking blues continue as a vehicle for ironic and sly commentary on current political events, […] over the years the political protest content of the form has occasionally eclipsed the rural humour component, as can be seen in “Singing in Viet Nam Talking Blues” by Johnny Cash and in “Talking Post-Trauma Blues (PTSD)” by Tom Smith, a 2007 indictment of President Bush’s treatment of veterans of the Iraq War who suffer from Post Traumatic Stress Syndrome:


“I’m sitting here on this front porch swing
My chest vibrates and my ears ring
Wondering what the hell’s the matter with me
Inside of my head is like World War Three
Not just a little hazy … I think I’m going crazy
others call me lazy … loser, wimp, coward
I’ve heard it all”

It may seem like a little thing, but I take it as an honor when people use my music in simple, positive ways. Last month, my folksinging friend Jane Fallon sang “You’re Not Alone” at her Sunday church service. (I recommend Jane’s latest CD. Great music, and sales benefit the American Foundation for Suicide Prevention). “You’re Not Alone” is also being considered to open a local fundraiser for brain cancer research. To me, this is success and sufficient reason to continue to write and perform songs.

Over the last three years I have become somewhat more brave, daring to express my feelings and opinions publicly. To be honest, there have been a few uncomfortable moments when I have been derided as “that well known liberal”, and felt personally attacked, but as long as I expressed myself respectfully, the vast majority of discourse has been respectful in return.

I don’t mean to overstate the effect of my music. For the most part, I write and perform for pure personal enjoyment and to be part of a wonderful musical community. I realize that except for the kind and tolerant encouragement of friends and family, most of my words and music land softly and unheard on remote ground, but every now and then a little echo comes back to my ears from unexpected places. For that I am encouraged and thankful. Compensation enough.

A few weeks ago I viewed Bill Moyers Journal in which he interviewed William K. Black, the author of “The Best Way to Rob a Bank is to Own One” (Amazon Associates Link). According to Bill Moyers, Mr. Black “suspects that it was more than greed and incompetence that brought down the U.S. financial sector and plunged the economy in recession — it was fraud. And he would know. When it comes to financial shenanigans, William K. Black, the former senior regulator who cracked down on banks during the savings and loan crisis of the 1980s, has seen pretty much everything.” You can watch this episode online.

I found myself getting more and more aggravated as I watched. I know several men and women who work in the financial industry. I know them as people who’s professional and personal mission is to use their industry for the common good. So it was especially upsetting to hear about greed, incompetence, and possible fraud from both industry professionals and our elected officials. It so happens that I was working to add a few new verses to update Woody Guthrie’s song “The Jolly Banker”. The interview inspired me to divert these verses to a melody of my own, though I am sure many of you can still hear Woody’s influence. 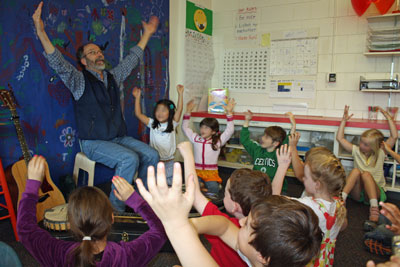 I was still feeling a little perturbed, as I read the news about Goldman Sachs possible involvement in the Savings and Loan crisis, and watched the value of my retirement savings drop 10% this week, when a teacher friend asked me if I would bring some music to her first grade class. Jerilyn is a remarkable teacher. On Fridays, “Something Wonderful” appears in her classroom. This is always a secret to the students, who are given clues throughout the week. When Friday arrives, anticipation is usually high. Last week, I was “something wonderful”. I am convinced that this world would be a better place if those tempted to perpetrate fraud were instead invited to be something wonderful in front of fifteen first graders from time to time.

Farther down the hallway, Ms. Miller’s kindergarteners were also sharing something wonderful with Mr. Massauro, the school maintenance man. Inspired by William Kamkwamba’s Moving Windmills Project, these children helped Mr. Massauro build a windmill from recycled parts he found in the shop.

Interestingly, this week we read the announcement that the Cape Wind Project has been approved and can now make progress. This is an important step toward energy independence and a more sustainable energy future.

God bless the children. I think we are going to be OK.

P.S. Here are the lyrics to this month’s song.

The Cards are all Stacked on My Side
© 2010 Tom Smith, Al Rights Reserved

Please call me Frank, I own the bank
Get in Iâ€™ll take you for a ride
I am honest and fare, and I’ll take you where
the cards are all stacked on my side

You need a friend who, will help and defend you
Get in I’ll take you for a ride
I’m just the one, who can get all this done
For the cards are all stacked on my side

There is no need to squint, to read the fine print
Get in I’ll take you for a ride
It’s not taking a chance, it’s creative finance
With the cards all stacked on my side

You can buy in this town, for no money down
Get in I’ll take you for a ride
Then I’ll take your estate with my variable rate
For the cards are all stacked on my side

If you come for to fight, my wrongs to make right
Get in I’ll take you for a ride
They will all be forgiven in Chapter 11
Where the cards are all stacked on my side

When I mismanage, it’s no disadvantage
Get in I’ll take you for a ride
You can’t let me go down, I’ll take you if I drown
Where the cards are all stacked on my side

Sat., May 22 Strike a Chord Concerts for Charity, Holliston, MA – benefit to support the troops
Sat., June 12 Board-a-Palooza, Acton, MA – to benefit the Douglas and Gates Schools as they raise funds to rebuild their boardwalk.
Sun., June 13 Parish Center for the Arts, Westford, MA – joining my friends Chris Pahud, Cheryl Perreault, and Steve Rapson in the round at John Ferullo’s open mike.
Sun. p.m., June 27 The Old Manse, Concord, MA – joining my friends Kate Chadbourne, Pat Kenneally, Bill Kehoe, Linda Abrams, and Robert Phillips as we do a round robin show.

Looking farther down the road, I am honored to open for the legendary Roy Book Binder at Amazing Things Arts Center in Framingham, MA on Friday, August 13th.

Clean Power Now is “a non-profit grassroots organization informing citizens and empowering them to support viable renewable energy projects and policies, and to secure their local and regional benefits.

We believe that the timely development of such projects, in conjunction with energy efficiency and conservation, will bring about a clean, healthy environment, an improved economy and a more secure, sustainable America.

Our immediate focus is to increase citizen support of offshore wind power in Nantucket Sound.”