Welcome to the special 12th anniversary edition of The Kitchen Musician. To celebrate, I am offering free download for all of my studio recordings (which now includes a long forgotten album I recorded in 1979), and I reflect on the last twelve years of writing and sharing music. I’ll meet you in the kitchen! 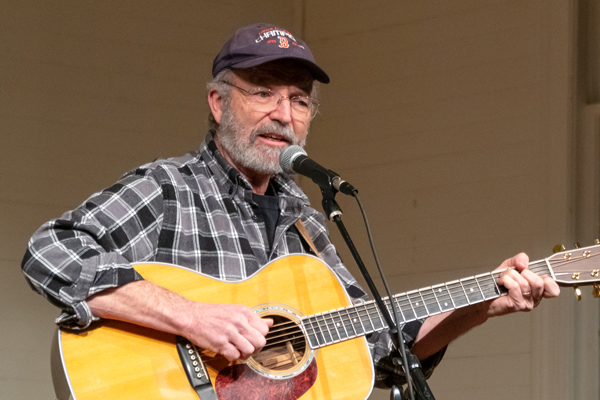 My summer show schedule is kind of light. With a backlog of several dozens of songs, I am trying to do some home studio recording this summer and fall. This is an experiment, so I am not sure what will come of it. Then I gear up for great gigs this fall, including a rare tour to western New York state.

It is difficult to believe that it was twelve years ago that I decided the way to help keep me energized to make music was to create a web site and set a goal to write a new song each month and share it. I have always shared informal “Kitchen” recordings of these songs for free. But now I have also decided to celebrate this occasion by offering all of my studio recordings for free download (or pay what you want).

My official studio recordings are available for free via my online Store. And all of my informal “unofficial” recordings can be found on my Jukebox page (or in the original “Kitchen Musician” blog posts.)

And as of today, my Jukebox page also contains links to two out-of-print recordings that I haven’t sold for a long time. Peace on Peabody Hill is a 9-song EP that I recorded in a single day as a Christmas present for my then 2 year old granddaughter. And with a little embarrassment, it also has a link to If You Want Any More You Can Sing It Yourself, my very first record (1979 – 40 years ago!) of mostly traditional songs for children. I hardly recognize myself as I listen to that old record.

This is my 137th blog post since May of 2007. Nearly all of these include a video of a recently written song, and those videos have been viewed on Youtube and Facebook over 200,000 times! That is not a big number for Taylor Swift, but I find it a bit humbling for this old-school folksinger. I have pretty much kept up my target pace of writing a new song each month (at last count, 115 new songs since May of 2007). Music continues to occupy a central role in my life, and I am inspired to continue as long as my mind and body allow me to do so.

In the process of updating the software of my web site, I had to revisit every single one of my pages and posts to make sure all could be viewed without problems. This brought back a flood of memories covering a wide range of emotions. I revisited songs that I had forgotten I had written. I cried as I read posts that included friends and family who are no longer with us. I was surprised at how some of my songs have changed since I first shared them (which was typically right after I had written them).

I have chosen a few of those memories to share with you. I have deliberately not chosen what I consider is the “best” of my work. Instead, I chose songs that probably very few but my early subscribers have ever heard, or songs that have touched me as I look back over the last 12 years.

My first few posts appeared randomly and simply shared some recording experiments, like these:

New Hampshire Traveller,
based upon the traditional “Arkansas Traveller”.
I do all voices and instruments.

Yearning and Blue
A song I learned from the Cheap Suit Serenaders.
On this I do vocals and play guitar, mandolin, slide whistle, crummy horn (soda straw), jaw harp, and wash tub bass

The Song that Inspired “The Kitchen Musician”

I had written some songs as a young man, but I always considered them to be “toy songs”, and none have survived. Then much later in life in 2007 I wrote “Talking Post Trauma Blues” and uploaded it to Youtube with no expectations. To my surprise, it seemed to strike a chord with many veterans and their families who suffer from the tragic effects of Post Traumatic Stress Syndrome. I have received a great many personal messages from vets and others to thank me for giving a voice to their struggle. At present, this video has been viewed over 60,000 times. When I recorded it, George W. Bush was in office, and you can hear some of his famous malapropisms in the song. I thought then that he was sure to go down as the worst president in our history. I have adjusted my thinking on that.

With the reception I got from singing this song, I decided in July of 2007 that I wanted to put a lot more attention into writing. That is when I created the “Kitchen Musician” blog in which I share a newly written song each month. The name of the blog was inspired by the place where I filmed that first song.

Join Me, Give Obama Your Vote

Through my entire life of performing music, I have sung songs that comment on social or political issues. So it is only natural that I would bring that to my own songwriting. Here is a song I wrote for Barack Obama’s first presidential campaign in 2008. The music is from the old traditional song “Old Rosin the Bow”.

When one sets a goal to share songs immediately after they are written, there is a risk that those songs will be refined and changed as they mature. In this case I have since changed the title from “A Single Room” to “Working Poor”. When I sing this song now I combine verse 2 and 3 into a single verse, which in my opinion is more effective than the original version in this video.

This was one of the first songs I recorded for Journey Home, my first studio album of original songs.

Long time readers of “The Kitchen Musician” recognize the various locations where I record these videos – my actual kitchen (and other rooms) at my home in Massachusetts, at various open mikes, at the school where I worked, and more. This is an example of a fun afternoon at our cabin in Jaffrey, NH. I had just written this song when my daughter Mally and niece Meryl showed up. I played it for them and asked if they would sing along for the video. To my great joy, not only did they agree, but Meryl showed us how to create an apple puppet. That inspired many more puppet characters and the rest is history, as they say.

Several of my videos were recorded where I worked at The Park School. Here is a fun example in which I recruited (coerced?) some of my fellow teachers to “volunteer” to help me sing a song to open the school day. None of these good folks had ever played these instruments before, all of which were made or found in my basement. Like many of my early blog posts, the video and audio quality is poor but you can almost feel the joy in this room, as the kids saw their teachers having some fun at their own expense. Later that day I was informed that the kitchen staff kept running out of spoons at lunch time because the kids were all using them as rhythm instruments. When I dropped by the kitchen to apologize, some of the staff were sitting around playing the spoons themselves.

Introducing Teachers to Their Instruments

Sometimes new songs played a roll of comfort during difficult times, like when we’d learn of the death of members of our family or community. Unfortunately, there are several songs inspired by the loss of loved ones. Here is an example I wrote after I learned of the death of Bill Kehoe. Bill was an active member of our open mike community, and a bandmate in our informal Irish music group, “The Chanticleers”.

During a particularly cold and snowy winter, I wrote this song while longing to transport myself to a warm and tropical island. It seemed only right to do the recording on my back porch, with the sound of the wind and snow plow in the background.

With so many songs shared over the last twelve years, I could go on and on. But I will end this trip down memory lane with a particularly memorable concert to honor Pete Seeger shortly after he died. Pete is without doubt the musician I most identify with and in many ways try to emulate. So I was particularly honored to share the New England Folk Festival stage with the great Tony Saletan, Lorraine Lee Hammond, and Lori Fassman to pay tribute to my mentor. In this video I lead a crowd of about 800 people in Pete’s song “Quite Early Morning”.

Thank you for indulging me as I look back on a wonderful twelve years of making and sharing music. Thank you especially for walking with me on this musical journey. May there be many more steps before us, and others to take those steps when we are done.

AmpleHarvest.org “is a unique nationwide resource that is eliminating the waste of food, the outcome being a reduction in hunger and malnutrition along with an improved environment. It is accomplished by utilizing the Internet to enable 42 million Americans who grow food in home/community gardens to easily donate their excess harvest to one of 8,397 registered local food pantries spread across all 50 states. These food pantries help nourish the one out of six Americans (including a quarter of all kids under six ) that rely on these pantries.”

Please join me in supporting AmpleHarvest.org.