I am still glowing from the great response to the release of my new CD Journey Home last month. I am blessed with the encouragement and support of family and many friends. December gets me back on track with a new song that I wrote to honor the life of Bill Morrissey, a New Hampshire based songwriter who could tell stories like no other. Join me in the kitchen. Time for a little tea… mine with honey.

I thoroughly enjoyed my CD Release Celebration at Amazing Things Arts Center. Family, friends and professional colleagues filled the house with love and cheers. This has to be my favorite memory of 2011. Thank you to all who attended, and to all who financially supported the recording of Journey Home. You can see a complete list of supporters, and some early album reviews at my Journey Home page. You can purchase this CD at my shows, or via my online store. THANK YOU! 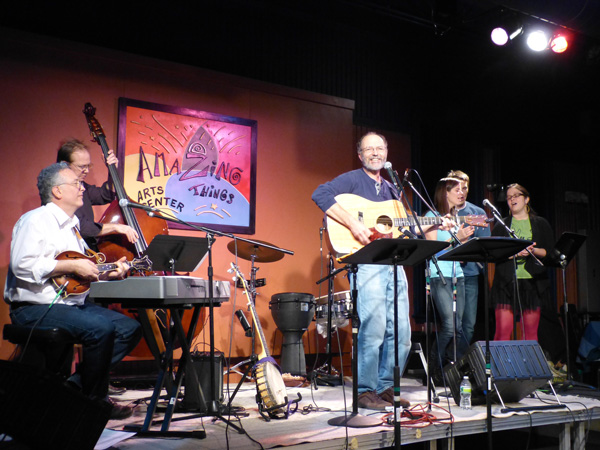 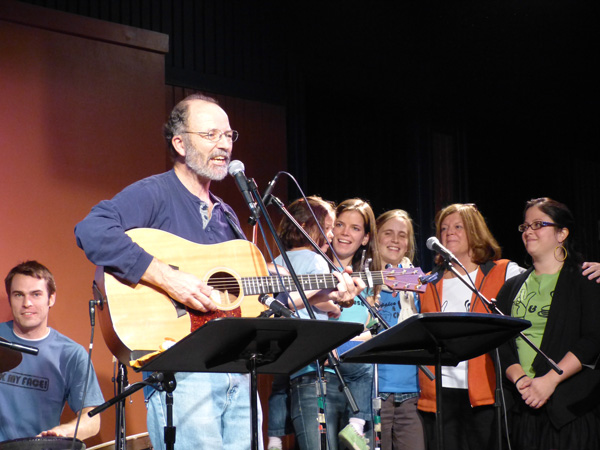 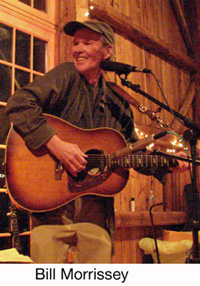 In July, this world lost one of its great songwriters. I felt a special affinity with New Hampshire based Bill Morrissey as his stories and characters seemed like they came right out of my second home town of Jaffrey, NH. He counted the poet Robert Frost among those influential to his music. Yes, one can describe Bill as a pastoral poet, but it was his characters and stories that made his music so special. My songwriting friend Terry Kitchen describes how listeners always empathize with and root for the characters in Bill’s songs, but these characters often seem to fall flat on their face just before they get what they are reaching for. It is that universal sadness, with a dab of country humor that first attracted me to Bill’s songs.

Like the characters in his songs, Bill skirted around the edges of fame, never quite achieving it. This was despite recording eleven critically acclaimed albums, two Grammy nominations, a novel, and four-star reviews in Rolling Stone Magazine. Why did he never make it like some of his contemporaries? Perhaps it was his non-commercial voice. Some of my friends even described his vocal style as a kind of joke – though I found this natural, untrained and unusual voice to be one of his strengths. It certainly was an instrument well suited to communicate the stories of his hard scrabble characters. I’ve heard Bill say, “I have to work with what I got.”

Or perhaps it was his struggle with depression and whiskey that was his most difficult obstacle to popular success. In a statement posted on his web site in 2009, Bill said:

“Most everybody knows that I’ve had some rough sledding for the last few years including my well known battle with the booze. A couple of years ago I was diagnosed as bipolar and I am on medication for depression but sometimes the depression is stronger than the medication. When the depression hits that badly I can’t eat and I can barely get out of bed. Everything is moving in the right direction now and throughout all of this I have continued to write and write and write. I now have enough songs for 2 new albums and I am very much looking forward to getting back in the studio.”

The last time I saw Bill was in 2010 at Amazing Things Arts Center when my daughter Mally’s band The And Company opened for him. I remember Bill as remarkably gracious and encouraging to Mally and the band. That evening, everything did seem like it was “moving in the right direction” for Bill.

For weeks after Bill’s death, he would enter my thoughts during quiet times. Late in August, shortly after Hurricane Irene rumbled through New England, my wife Margo and I were sitting in our New Hampshire cabin as the gentle aftermath of the big storm tapped on the windows. The sadness of the rain coaxed the melody of this song from my guitar, but the muse seemed to be keeping the lyrics to herself. Margo said, “That’s pretty. What is it?”. I replied, “Just chords played in the rain.” The phrase excited me as I heard it come from my own mouth, and I recognized it as the perfect metaphor for Bill’s life. I quickly picked up a pencil and the first draft of this song fell out onto the paper. After singing it for and discussing it with some trusted friends, it has settled into this current version.

But nothing can beat the master himself. Here is a 1999 performance that appears in “Hellhounds on My Trail – The Afterlife of Robert Johnson”, a film by Robert Mugge. According to popular legend, the 1930’s blues singer Robert Johnson sold his sole to the devil in return for his amazing ability to write and perform the blues.

You can read many tributes to Bill at BillMorrissey.net.

Nov. 29, Tuesday, Newton, MA I will be the guest lecturer/performer at Lasell College to discuss and demonstrate how folk music humanizes and deepens our perception of history. Hosted by Professor Lorraine Hammond. Sorry, this is a private show.

Dec. 4, Sunday I will be taping a video segment for the Acton Music Project for later broadcast on local cable access.

Dec. 4, Sunday, 3:00 pm in Westford, MA I will be supporting Jane Fallon’s CD/Book release at the Parish Center for the Arts. I will be singing a couple of cowboy songs to honor Jane’s father and her “Seven Songs in Seven Days” project. Joining Jane and her band will be Cooper & Kenneally, Fishkin & Groves, and New England Country Music Hall-of-famer Izzy Dovebird.

Dec. 31, Saturday, 10:00 pm in Needham, MA I return to the Homegrown Coffeehouse as part of the First Night Needham celebration, joining “The Rounders” – Chris Pahud, Cheryl Perreault, Steve Rapson and Ken Batts. Help us bring in the new year, in a folkie sort of way.

MusiCares provides a safety net of critical assistance for music people in times of need. MusiCares’ services and resources cover a wide range of financial, medical and personal emergencies, and each case is treated with integrity and confidentiality. MusiCares also focuses the resources and attention of the music industry on human service issues that directly impact the health and welfare of the music community.”

If you are a musician in need of critical assistance, click here to locate the MusiCares contact nearest you.

Join us to support MusiCares.